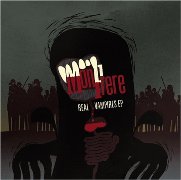 It's easy to see why Mon Frere get people excited: they've won a big contest (namely the EMP Battle of the Bands), they've gotten gushing reviews from KEXP and heck, they're the best thing to come from Mountlake Terrace since, well, anything. After wowing crowds at the Battle of the Bands, they've now recorded their debut EP, Real Vampires and what they've created mixes growling indie rock that prove their Pacific Northwest lineage with a heavy dose of synth swirls. What sets this three-piece apart from other post-grunge indie rock are the tight songcraft and beguiling melodies that make Real Vampires an addictive overture.

This five song EP clocks in at a speedy 13 1/2 minutes and sets a tone that might be best described as Milemarker and Jucifer without the neo-industrial gloom that permeates either of those bands. "R.V.D.G.S. (Fighting Mad)" tears out with dueling synth lines, rumbling bass lines and screamed vocals. "You better give it your best shot" wails lead singer Nouela Johnson in what sounds like Mon Frere picking a fight right out of the box.

They follow up the deafening opener with "Up Circle" that takes their hard sound and mellows it with a catchy chorus. Like a revamped Letters to Cleo (thanks to the haunting similarity of Johnston's and former LTC singer Kay Hanley's voices), "Up Circle" has a pop appeal that's hard to deny (i.e., one hell of a radio single). "Orcs Don't Know It" changes the tempo a little bit, capturing the thunderous emotion of mid-90's classics like PJ Harvey's "Man-Size" with soaring vocals over pounding guitars. Meanwhile, "Bunch of Broccoli" (other that having a great song title) is a synth-infused page out of Call the Doctor. They finish off the blistering EP without taking a breath: "Real Ultimate Power" crunches away until the final second, with Nouela's vocals churning with passion and pain.

The most significant facet of Real Vampires is the remarkably tight sound that Mon Frere created in a few days of recording. The EP lacks the typical unpolished, band-searching-for-a-voice sound like that of early Yeah Yeah Yeahs (who Mon Frere can be favorably compared) EPs. Mon Frere appears confident in their musical direction, and that conviction makes EP even more palatable. Mon Frere has expanded the sound that was started by PJ Harvey and polished recently by groups like Pretty Girls Make Graves, Denali and the Yeah Yeah Yeahs, where bands aren't afraid to mix roaring music with graceful vocals. Real Vampires is like that first brief date with a new love when all you want is more, and here's to hoping that their 2006 album will be the beginning of long relationship.