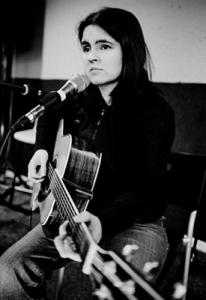 Emma Pollock and Alun Woodward of the Delgados

On the eve of Election Day (now known in the blue states as Black Tuesday), imaginary jessica met up with Emma Pollock and Alun Woodward of The Delgados a few hours before their show at the Crocodile. Since the Crocodile is typically closed on Mondays, the back bar was entirely deserted and quite cold — they bundled up in their coats and had a chat about in-stores, producers, their latest album, scary movies and roller coasters.

TIG: You've got an in-store at Easy Street in a few hours. Do you like doing in-stores?

Emma: No, no. I hate them. They're very, very clinical. The lights are too high and you can see people – that's a bad thing. Generally you don't get a chance to practice or do a sound-check. Sound-checks are good from a psychological point of view because they give you a chance to get into the atmosphere. But with a record store, you're just thrown in the deep end and asked to just do it. It's a bit like going round to see a friend and their mom comes in and says "hey, you play the guitar, don't you? Could you just play something for us? Don't be nervous, you know, we're rooting for you." It's that kind of spotlight thing which I don't like. And you also see a lot of shoppers come in who clearly aren't there to see you, and then they leave. We're not doing a lot of in-stores throughout the tour so…

Alun: I think that changes in the next few days, I think we do like five a day. (laughs)

Emma: Maybe we should get [drummer] Paul and [bassist] Stewart to do it. They could do the rhythm section, they could just do bass lines.

TIG: A lot of people, myself included, have really enjoyed your newest record, Universal Audio. For your last two records you had Dave Fridmann as producer but for this one, you self-produced it along with Tony Doogan.

Alun: Tony really produced it. It says Tony Doogan and the Delgados just because everyone was involved so much. We expected to do this album with Dave but he was really busy and we were really busy and as time went on it became apparent we were going to do the record in the UK, which is obviously not good for Dave. So we went to Tony and asked him if he'd record and mix it and he was like "I thought you'd never ask."

TIG: So you had been planning to do it with Dave?

Alun: We wanted to have that option but, in the end, it wasn't an option.

Emma: We've always worked with Tony. He's always recorded us, which is a crucial part of an album. Regardless of who produces it, you have to make sure the actual recording is something usable. And Tony's always done that. We would take Tony's recording and we would all go over to the states and mix it with Dave. We did plan to do that with this record but it just didn't work out. So we thought here's an opportunity to do this and we don't have to leave our families and we can give Tony an opportunity to do the record from start to finish, which has worked out tremendously well. Because at the end of the day, not to cast any judgment on Dave's part, because he's a wonderful guy and a great producer, but Tony's also got a huge amount of potential in that field as well. We've been working with him for a long time and we wanted to give him the chance to do it. It's probably a different record than if Dave had done it but then you've just got to say do you like it? Yes we do, it's great. So that's all there is to it. We were excited that Tony was going to come in because he knows us as a band really really well. We've all got the same really sick sense of humor, which is good when you're suffering from cabin fever after week eight.

TIG: How long did it take to make Universal Audio?

Alun: We were in the studio for twelve weeks, and that's how long we thought it would take us to make it. Then we came across to the states to play some shows in March, and then I think we went back in the studio for another four weeks. It just kept getting longer and longer. We thought it'd be two weeks, and then after two weeks we thought one more week and then there was, maybe it was five weeks. I can't remember.

TIG: Are you excited about getting back home at the end of the tour?

Emma: Yes. It reminds me of Glasgow. It's raining and the layout of the city is quite…there's a lot of parallels. Yeah, I like it a lot. I just wish it wasn't raining, so we could've gone around a bit more. I saw a very very large umbrella today. A golf umbrella.

Alun: Because I'm light, I've always worried that when I carry an umbrella I'd take off with a big gust…

Alun: Yeah. It wouldn't be bad as long as it didn't spin too much.

Emma: You know what you could do…You could carry a big weight with a string attached to it, quite a lot of string, so if there was a momentary gust, you could drop the weight…You'd also have to carry a small trampoline…

Alun: Yeah, to land. Or have springs on my shoes.

TIG: What have you guys been listening to while you're been driving around the US?

Emma: Film soundtracks while a film's going on. (laughs) We've been watching films.

TIG: What've you been watching?

Emma: I saw the scariest film last night. The Exorcist 3.

TIG: I've never seen any of them. I've never been able to find someone to watch it with me.

Emma: I'll watch it with you! We can go watch it after this. And Alun will come too.

Alun: I'd never watched a horror film until Emma persuaded me to watch The Shining.

Emma: The Shining is a great great film from so many points of view. Cinematography-wise, it's brilliant. Acting-wise, atmospheric – it's just fantastic. But psychologically – jesus, the blood coming out the doors! There were a few Halloween-esque programs on last night and one of them was on the travel channel and it was about haunted place, haunted hotels. Last night we were in Pendleton, and we were staying at a hotel that was eerily quiet. We don't usually stay in hotels since we've got the sleeper bus. I ended up watching the end of Exorcist 3 alone on this bus in a car park. I was genuinely quite scared.

TIG: Did you sleep on the bus or did you have to walk back to the hotel?

TIG: That would've been a long walk. (laughter)

Emma: I checked if the bus was locked three times.

TIG: Is it hard to find?

Alun: No, it's really quite common. You can pick it up at any store, in the jazz section. You listen to it and it sounds really good and you hear what he's doing with a guitar and then you read that he only had three and a half fingers because his caravan lit on fire and fused two of his fingers together. And when you hear what he's doing you're like oh my god, you can't believe he's not using a delay pedal. You can't be sure how can possible do what he's doing. I like going to sleep listening to music and it's something I really like going to sleep to. I was listening to Devandra Banhart, too. The first one – I can't remember what the album's called. Something about hands.

Emma: I keep forgetting what to buy. I didn't bring many CDs with me. I generally pack the bare essentials and I always remember to bring books but I never remember to bring music because [husband and fellow Delgado] Paul brings a lot of music. I get really frustrated with myself because I hear a song…like the other day, I heard that song by Echo and the Bunnymen, the one that's in Donnie Darko, and every time hear that I say to myself I've got to get that – it's absolutely amazing. And then I walk into the record store and I look at everything and I just walk back out. It's like music overload.

TIG: The same thing happened to me with that same record.

TIG: The only reason I got it was that I was flipping through a used bin and found it.

Alun: I really want to get that Pink Floyd record, the one that's got "Interstellar Overdrive" on it. That's a great album.

TIG: That's an awful one. Did someone go with you?

Emma: I've never been as scared. Even last night wasn't as scary as this. Sitting in it, getting strapped in and all you can see is downhill into a black tunnel. And then you're off and you can't breathe properly because you're so scared so you just scream. People who like that…I don't understand. Paul likes roller coasters. It's like, would you like to eat your own arm? Would you stab yourself with a fork?