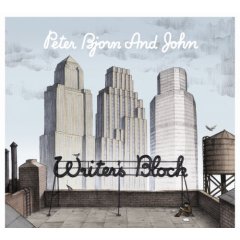 The first time I heard "Young Folks," the first single off of Stockholm-based Peter Bjorn & John's third full-length effort Writer's Block, I was engaged in some late-night shenanigans at a club night in London's Soho last year. The whistling was what got me at first; it was catchy and simple like a children's lullaby. The music was as minimal as possible, relying mostly on a male-female tradeoff vocal and a heavy backbeat. I soon came to reference it as the "we don't care about the old folks" song, simply for the fact that after hearing it in seemingly every indie club in Central London, that was still the only discernible lyric. It wasn't until I returned to the States in December that I decided to Google "we don't care about the old folks + lyrics" and figure out who was responsible for all that whistling, and I'm terribly glad I did.

A full listen to Writer's Block, which releases in the U.S. this week, reveals that the album is packed with great material, and "Young Folks" is just the beginning.

The songs on this indie-pop record roll from epic, reverb-heavy, Walkmen-esque intros of "Objects Of My Affection," "Start To Melt," and "Roll The Credits" to the drum-and-guitar driven "Let's Call It Off," to the album's best track, "Paris 2004," a bouncy and lilting ode to a weekend with your lover in Paris, in which Peter Moren sings about half-eaten croissants and strolling the boulevards. The song's chorus, "I'm all about you/you're all about me/we're all about each other" is one of the most simply stated confessions of young love since John and Paul decided they wanted to hold your hand.

The instruments are perfectly melded on every song with John Eriksson's drums providing a steady foundation. The music shifts seamlessly from major to minor as the vocals change from exalting to melancholy in a constant up-down flux that gives you no choice but to stay riveted to every lyric, guitar riff, and synth line. Thematically, Writer's Block is about love, but its views on how important any of that really is change with each song. Within three songs, the album jumps from the lover's lament of "Up Against The Wall" to the carefree days of "Paris 2004" and lands in the ditch with "Let's Call It Off."

This album is powerful, fun, and heartbreaking all at once. It's already a strong contender for my favorite album of the year… and it's only February.