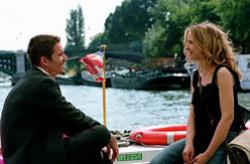 "If you don't believe in any magic or mystery in life, you are basically dead."

In the spring of 1995 I had just finished a rather unsuccessful two-year attempt at graduate school. My life opened up in front of me with a crushing sense of possibility. To avoid 'real life' just a little bit longer, I bought a plane ticket to Eastern Europe and planned to backpack for two months as I figured out what in the hell to do next.

A mere week before leaving for my trip, I sat in a dark theater and watched a movie I knew little about beforehand. That movie was Before Sunrise. It began with the sights and sounds of a train speeding through Europe, and then a shot of Jesse (Ethan Hawke) looking out the window. He was the same age as me, and had the same stupid-looking goatee. Something stirred inside me. I was no longer just watching a movie, but a projection of my life in the near future. When Hawke's character met a beautiful French woman named Celine (Julie Delpy) and convinced her to spend a romantic evening with him, all of the desperate and uncertain hopes I had for my trip — and generally for love and adventure in my life — suddenly had shape and meaning. It wasn't just happening to me, it was better: it was the much-sought-after movie of my life.

Well, I did meet a French girl on the train from Prague to Krakow. And the film did embolden me to talk to her, and she graciously accepted half of my apple and my shy flirtations. But I did not convince her to spend a romantic evening with me in Krakow. The trip was a wonderful adventure that I would remember my whole life, but it was a lonely adventure. I had fallen into the trap that so many of us do, the disappointment that life is not more like a movie. That we cannot edit life's events to the correct sequence of our dreams.

Before Sunrise was a revelation to me strictly as a film as well. The writers and the director (Richard Linklater) trusted that an audience would accept a film which consists mostly of two people just talking. A film which held the simple yet risky faith in the drama of simple human interaction, and in the small moments of beauty in life. The "space between two people", as Julie Delpy's character Celine says. It was a film that celebrated intelligent conversation and the romantic ideal. It was more realistic than a typical film in the sense that it had no convoluted plot or special effects, but it also embodied that magic of the movies, and of youth, that made me actually believe in meeting my own French girl on the train.

In the category of "I'm surprised it hasn't happened already — or maybe not", a small independent film has a sequel. Before Sunset is what happens when the characters Jesse and Celine meet again, nine years later. Jesse has written a book, loosely based on his adventure with Celine, and is in Paris on a promotional tour. Celine arrives at the reading, and the two decide to go have coffee together before Jesse's plane leaves that evening. And so they do a little walking, and a little talking, in real time, and that's the whole plot of the movie. Really.

Well, there is the whole matter of discovering whether either of them showed up in Vienna six months after the first movie ended, as was romantically promised at the end of Before Sunrise. We were left with Jesse's sly smirk as he thought about his encounter, and Celine's look of bemused concern, and we the audience wondered along with the characters if there was a future for them, or just a good story to tell. It seems a shame, in a way, to find out what really happened, but that discussion is quickly dispensed of in Sunset and the rest of the movie is about the dichotomies I alluded to earlier: idealistic youth vs. cynical maturity, movies vs. real life.

Real life intrudes in a big way in this film, as it does for anyone in their early thirties. Jesse is married, but finds himself more in love with being a father than with his wife. Celine has become the successful woman fighting the good fight for an environmental cause, but finds herself unable to hold on to a committed relationship. They eye each other warily as they try to decide what could have been if they had met again in Vienna, how their lives could have been different, and what it means that they are together again now. Their decisions now will affect other people, and would be an even greater risk to their more fully-formed selves and lives, and yet, somehow, not as momentous and exciting as their choices seemed in their youth. Now the desperation of their longings is affected by the slippery nature of time, not by youthful romantic idealism.

What's even more interesting to me, the film geek, is that this film seems even riskier than the talky subtleness of the first. In Before Sunrise, the romance of the situation was enhanced by shots of picturesque scenes of Vienna, of romantic situations such as the Prata Wheel, and of chance encounters with locals: this mise-en-scène worked as a catalyst to the flirtations and exploration of each of the characters' personalities. The romance of the short time together, the poets, the music, the changing venues, the chance encounter with a harpsichord, all seem like magic. Youth magic. Movie magic.

By contrast, Before Sunset gives the two characters an even shorter time together, an anxious time, to decide what they mean to each other. All of which is done in the bright sun of the day, the stark light of real life, the immediacy of a film shot in real time. A boat ride on the Seine is Jesse's desperate attempt to inject a little of the romance, but the movie is almost entirely without cutaways to picturesque scenes, without the intrusion of other characters, without the obvious romantic situations. Instead it is two very real people who feel connected to each other and try to talk about it — and that's the only context, the only drama necessary. Truly a filmmaking risk. And a beautiful one.

The end result of this seemingly gimmicky idea of having a sequel of two characters nine years later results in one of the best examples of 'realism' I have ever seen on film. Linklater, Hawke and Delpy — as well as the audience — have grown up together with these characters, and the result is that we can watch this film as we would watch two real-life friends of ours talking, without the usual filters of movie magic, but with a kind of magic nonetheless. Perhaps this is the magic and intensity of real life, where we accept that we cannot edit the sequence of our lives but can occasionally write an unexpected plot twist here and there.

Warning: this film truly depends upon seeing the first, more so than any sequel I can think of. Only if you truly can relate to — and, on some level, care about — the characters of the first film can you find the sequel meaningful at all. So see them both!