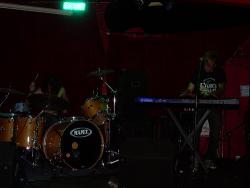 This Monday morning was definitely a Monday morning. I take two busses to get to work and I missed one to get me into downtown Seattle and one to get me out of downtown Seattle by somewhere around a combined 45 seconds. Then when I found my way into work about 45 minutes later than planned I was asked to join a conference call before I had the chance to take off my coat let alone ask what in the hell was going on.

As I was getting things sorted out at work and figuring out what was needed from me, but still not figuring out why I don’t drink coffee, I checked my TIG e-mail account and there was a subject line for one that sounded promising. It read “If you come to our show, we will get you drunk.” On that Monday, how could I respond with anything other than “ok”?

The band that was making the generous offer was Benjamin Bear and they were playing Tuesday night at Chop Suey with two bands I am familiar with and like, Hotels and Smile Brigade (full disclosure: I’m friendly with the former). Worst case scenario, I figure, is that the band is not my taste and the episode of Colbert I missed was really, really funny.

In the end, Benjamin Bear did not get me drunk but unnecessarily gave me a drink ticket. Even without the overt bribery, I enjoyed the band quite a bit. Moreover, just as Sam Donaldson’s good graces couldn’t be bought with a piece of birthday cake, mine couldn’t with a vodka cran (however delicious they may be).

They came on stage around 8:30pm and had a fairly decent crowd for the first band on a Tuesday night. There were about 40 people at Chop Suey around that time, and almost all were on the floor.

Benjamin Bear is a two piece band with Mychal Cohen on keyboards and vocals and David Stern on drums. Not just because of their keys/drums setup, but I found the band remind me of The Dresden Dolls. Sure, that particular band is led by a woman (Amanda Palmer) and is much more theatrical but the two bands mine similar territories. The lyrics on a song like “Russ” (“I need all the help I can get; codependent relationship; started in as something I can stop; $80 an hour it will cost”) are thematically similar to, for example, “Girl Anachronism”.

Elsewhere in the set I found Cohen reminding me of TIG favorites like John Roderick and Ben Gibbard with their earnest, heart-on-their-sleeves harmonies and lyrics. Just as I was writing in my notepad that Cohen effectively conveys a sense of vulnerability, the song changed course and he was screaming, but it worked with the song and it did not seem forced.

Off-stage, I found Cohen very friendly and approachable. On stage, I enjoyed his band quite a bit. Talking to him before and after the show, I sensed someone who understands how hard it can be to get someone to take notice of your band. There are definitely more bands than music writers in Seattle and generating coverage can be difficult. In the end, it was worth it. I found a band I liked that I might not have otherwise heard before. In the end, that’s all that matters. Isn’t it?