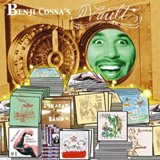 Songs From The Vault: Volume 1

We all want to get to know a guy like Benji Cossa: the funniest guy at the party, full of love and cheer and quick to sing some crazy-good new song on the back porch on a borrowed guitar. Those of us in the music scene HAVE known guys like Benji, seeing them at open mic shows where they are the only singer-songwriter to captivate the audience with some disturbing but endearing material like they've never heard before. Or they are opening for more mediocre and accessible headliners. Or, most often, they are endlessly recording their masterpieces on four-track cassettes for their friends for years without 'making it' in a band. They rarely get signed and get those gems out there. It is both the biggest joy and the most tragic thing about being in the music scene — whatever that is.

Cossa's first recorded release was on We Can Still Be Friends, a various artists anthology for the Magic Marker label back in 1998. His track, "Tom's New Wave Movie," was a last minute addition as well as the last track on the compilation. "My friend Tom was making a movie in college and he wanted some music for it that sounded 'new wavey,'" Cossa explains. "I don't remember what the movie was about. Probably a girl and a guy. The song is about that. Everything was about that then. As I recall, the song was at least a little funny. Maybe the movie was too."

The song ended up bring covered by other bands on the Friends compilation, although it is currently out of print. "I doubt 'Tom's New Wave Movie' will ever be re-released. I have other songs that have been out on compilations that I'm sure will also fall by the wayside. The song 'April' which was on 'They Keep Me Smiling' (United Bamboo, UUAR) a little over a year ago, has plans to be released in an album, though." That album was ex-Black Dice drummer Hisham Bharoocha's import compilation.

Magic Marker Records is taking the chance on a full-length catch-up Cossa smorgasbord, as the owner lived with Cossa in Portland for a time, and has made it a private mission to help his housemate dig deeply into the pantry of privately issued audio tapes for an anthology of delectably wry whimsy created since 1995.

"I tried to pick songs that didn't sound tooooooooo stuck in the indie nineties," Cossa says. "I didn't want the songs that were too goofy, or the ones that are too much about ME, or the ones that were too thin and insubstantial sound-wise. I wanted songs that show a progression as well as give a flow and focus to the album. Each song should be able to stand up as a good, well-written song, and be able to contribute to the whole. Most of the time I think we did that on the album."

Although it spans a decade, the album is enjoyably consistent all the way through. It starts off with minimalist acoustic camp-fire sing-a-longs, but by the fifth track ("Love Is Like Lightning") Cossa's songwriting becomes stronger, as weird, distorted guitar tones and textures augment the choruses that display increased dexterity. The album gets more assured, funnier, and deeper, as Cossa continues to build on his deceptively simple sound. Its most wickedly astute observations are saved for the very end, in the captivating "Warm-Blooded Doll" and the self-deprecating closing anthem "Bonafide American Dudes."

"I'm definitely not making fun, I was writing about what was happening at the time," he insists. "Honestly, though, I like Kevin Costner and cheeseburgers."

Cossa doesn't know exactly how many cassettes he made and gave to people over the years. "I mostly made them in six month batches and sent them or gave them to friends whom I knew were interested. One time I made a 'Four for Tour' tape to sell at shows." Due to his prolific nature, Cossa originally planned his first collection to be a four CD set, but "it's a lot to release officially and it's a lot to ask of a listener. I think I could have made it work, but all in all what we're doing is probably the best thing for now."

Cossa's form of neo-traditionalist eccentric romanticism could possibly be prepared to Jonathan Richman or the Mountain Goats, as it is in the bio, but for me he is sort of the anti-Stephin Merritt. He uses the same kind of stripped-down ukelele-playing and humming with endless lyrical variations of relationship-observation. Without brooding, he totally accepts his inability to succeed in love ("Affection").

"Who Took The Rebels" is as good as anything on 69 Love Songs. "Without moving through the lyrics, (that song is) about moving around a lot and writing songs. Some people do it to be cool and other people do it because they have a drive that comes from some place else. I think, for me, finding the place where the songs come from and dealing with the reasons why I want to make them is a contributor to why I stopped writing so frantically."

Cossa is enjoying living in Brooklyn, and plays out about once a month. But it seems that he has settled down a little since his maelstrom of indie tape creation days. "That's the thing. I used to write all the time," he says. "Sometimes I'd have up to three songs per week. I have written maybe 800 songs. When I moved to new York in late 1999, I had about 600. I counted because I was transferring everything from four track tapes to CD. And was missing a few tapes, too. Since then, I think 200 more songs is a fair guess. Lately, though, I've slowed down to a crawl. I don't even keep the four track out anymore."

"But when I sit down to write, I think I do a much better job than I used to," he asserts. "I have been recording at two particular friends' houses, and I really think we're upping the ante. The result is something that at this time I can't do on my own, and is really on the line that I want to walk. So, I'm not as prolific as I once was, but I haven't run out like Ged, the Wizard of Earthsea."

Cossa is working on music now for a documentary about "Mathletes" that a friend is making. His first movie song though was "Volcano," for the Ben Coccio movie Zero Day. "I think it's a great movie and you should see it if you haven't already. I believe it's on DVD now. Ben was showing a screening of it at the Film Anthology and I went to see it. He had the Beach Boys song 'I Just Wasn't Made For These Times' at the end of the movie but couldn't keep it there because of rights and expenses. At the time I was recording a few songs with this producer I met through a customer at the pet store where I was working. 'Volcano' was one of the songs we had recorded. Ben and I had met up to see if I had anything to fit where the Beach Boys song was and he decided 'Volcano' would."

As this is the first volume of releases from his vast backlog of songs, I ask if the next one will again cover the same years, working up again to more recent work. "(No) it's chronological, picking up where that one left off," Cossa says. "It goes up to a few years ago. I'm working on recording my most recent stuff now."