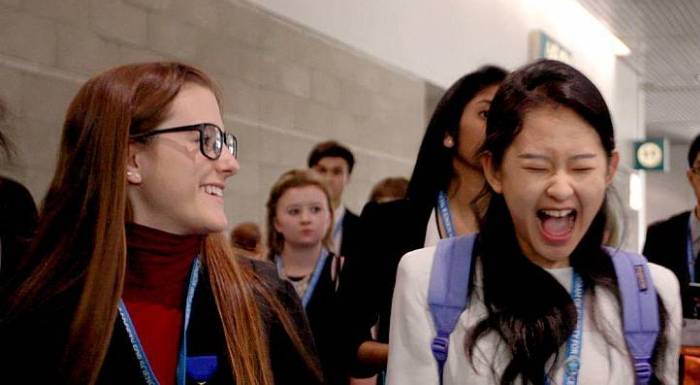 I gotta say, SIFF audiences made some good picks for this year’s Golden Space Needle awards: the glorious suburban-adolescence drama Eighth Grade and the heart-rending Mr. Rogers documentary Won’t You Be My Neighbor? took top prizes. Neither of these films will be part of the Best of SIFF 2018 program beginning this weekend at the Uptown, but don’t fret: Eighth will be back at the Egyptian in July for a full run, and Neighbor is already in cinemas. (For the record, so are other SIFF standouts American Animals and First Reformed, and not-quite-standouts On Chesil Beach, Disobedience, and Queerama – no squeaky Uptown rocking-chair seating required!)

The roster of films in question – 15 narrative and documentary features, 2 shorts programs – is comprised, as in previous years, of festival award winners and audience favorites. It provides a chance for procrastinators or the otherwise under-SIFFed among us to partake in some encore screenings. Compared to the festival proper it’ll be less chaotic, the queues won’t be as ridiculous, and that ubiquitous SIFF 2018 trailer will (hopefully!) be absent completely.

The full ‘best-of’ schedule, with some parting thoughts on the selections covered by TIG:

4:30p: My Name is Myeisha
{FutureWave Award}
This astounding American indie – a dreamscape of a black teen’s life and dreams as she becomes a statistic of police violence – was a true SIFF 2018 highlight for me. Hip-hop, spoken-word poetry, dance, and entrancing visuals discombobulate, confound, and pack a serious wallop as they convey the title character’s tales. A late-festival stunner that knocked me upside the head with a glad realization: new American cinema still has the capacity to astonish.

6:30p: The Guilty
{Golden Space Needle Award for Best Director}
This Danish thriller has racked up quite a few other awards, including Sundance’s audience prize. The action takes place in an emergency call center, where a dispatcher receives a panicked distress call from a woman, leading to a frantic rescue mission with a phone as the only resource. This one juuuuust missed my SIFF schedule and I’m glad to have another opportunity to catch it on a big screen.

8:45p: Thunder Road
{Grand Jury Prize for New American Cinema}
SIFF synopsis (which from here on out I will simply call SIFFnopsis, ok?): “Multitalented writer/director/star Jim Cummings gives a jaw-dropping performance filled with bursts of offbeat humor and unexpected pathos as a small-town police officer struggling to process the death of his mother, an impending divorce, and his own unrecognized cluelessness.” This one didn’t even hit my radar during the festival, but ok, I’ll bite.

1:30p: Inventing Tomorrow
{Documentary Grand Prize}
SIFFnopsis: “Meet the passionate teen innovators from around the globe who dedicate their blood, sweat, and Bunsen burners to craft cutting-edge solutions to the world’s environmental threats and present their findings at the world’s largest high school science competition, the Intel International Science and Engineering Fair.”

4p: The Russian Five
SIFFnopsis: “Sports and politics clash in this compelling historical documentary about five Russian hockey stars who defected to America to join the Detroit Red Wings in the 1980s, leading to the team’s back-to-back Stanley Cup championships.”

6:30p: Prospect
Locally-produced space western about survival, trust, and an elusive place called home. Most of the action takes place on a remote moon, where a teenage girl and her father arrive to search a toxic but magnificent woodland (played by Washington state’s very own Hoh Rainforest) for tedious-to-harvest gems. But they aren’t alone, and all I’ll say about that is Pedro Pascal is there. And as hard as I swooned, this isn’t that kind of movie. It’s minimalistic, yet grand, and even given the film’s tedious stretches of difficult-to-understand dialogue (thanks for that, retro space helmets) it’s clear that Prospect‘s makers have a lot to say.

8:45p: The Reports on Sarah and Saleem
{Official Competition Grand Jury Prize}
SIFFnopsis: “This engrossing psychosocial drama begins when a casual love affair between an Israeli woman and a Palestinian man is exploited by the security forces of a divided Jerusalem, leading to a series of dangerous lies that could turn their illicit relationship into a political crisis.”

3:45p: Pick of the Litter
{Lena Sharpe Award}
SIFFnopsis: “It’s puppies galore and a ruff’n good time as we watch five Labrador siblings undertake guide dog training, from basic manners to the intensive 10-week course after their first birthday. If only everyone could graduate; not that there’s anything wrong with being a fluffy civilian.”

6p: The Last Suit
{Golden Space Needle Award for Best Actor}
Sweet gem of a movie about a gruff, cranky 88-year-old tailor named Abraham, played beautifully by Argentine actor Miguel Ángel Solá, who leaves his Buenos Aires home for a one-way trip across Europe to reconnect with the man who saved his life after Auschwitz. The plot partakes in quite a few “scrappy road trip in search of…” sub-genre tropes, but the film’s performances – especially the central one, rough by design, imbued with longing – ultimately help give the material a tidily-stitched finish.

4:30p: Waru
Eight female Maori directors provide eight single-shot vignettes, all taking place within the same ten-minute period of one fateful day, in the looming shadow of a young boy’s death. As with most anthologies, the individual pieces vary in quality and captivation, but when the stories really work they’re as powerful and raw and fierce as the women who populate them.

6:30p: Supa Modo
Very special little movie that’s sweet and bitter in satisfying proportions. The story follows Jo, a nine-year-old Kenyan girl who is a superhero superfan, soon after she receives a terminal diagnosis. Unable to force Jo to spend her remaining days in bed, her community comes together to support her belief in her own special abilities. By the end of its short runtime, Supa Modo becomes a loving recognition of the power of cinema – and although the heroes aren’t Marvel-flashy, and the setting is far from Wakanda, there’s a post-credits scene. Stick around.

8:30p: Afghan Cycles
{Documentary Special Mention}
I heard a lot of in-queue buzz around this one. SIFFnopsis: “Meet the inspiring women who have come together to fight for their rights – to bicycle. Based in the mountainous province of Bamiyan, the National Cycling Team is Afghanistan’s first women’s racing league, even though the very act of riding is still considered a ‘morality crime’.”

6:30p: C’est la vie!
SIFFnopsis: “Providing a sober, chic, and elegant wedding party in a 17th century French palace proves to be a tall order for a beleaguered caterer and his mishap-prone staff in the latest lovable French farce from the filmmaking team behind The Intouchables.” Apparently it hasn’t much to do with this.

9:10p: See You Up There
SIFFnopsis: “It’s 1918 and revenge is in order for a malicious lieutenant after two soldiers, one a talented artist that loses his jaw, survive his orders to charge across No Man’s Land despite the Armistice ceasefire.”