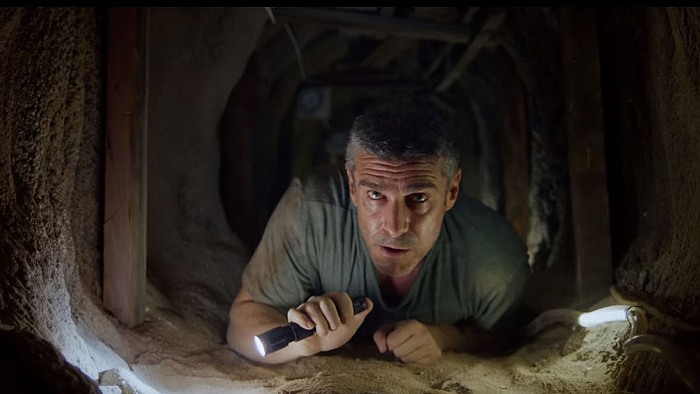 Another year, another SIFF, another Best of SIFF program at the Uptown. Once again the festival programmers will be serving up a diverse roster of films (six features, five documentaries, one shorts program) comprised of award winners and audience favorites. If you feel in any way under-SIFFed, this Friday through next Thursday may hold the SIFFillment you seek.

Full schedule appears below, along with some parting thoughts on the selections covered by the TIG team this year. All screenings at SIFF Cinema at the Uptown:

6:30p: At the End of the Tunnel
{Golden Space Needle Awards for Best Film and Best Director}
The 2017 festival’s big audience-award winner is a thriller about a wheelchair user who discovers that his new neighbors (including a single mom has captured his fancy) are planning a bank heist by tunneling below his home. I wasn’t able to successfully make many of the leaps of faith required by the narrative (hint: this is one of those “just call the damn police!” stories), but the tunnel scenes are undeniably suspenseful.

9p: Bye Bye Germany
This audience fave wasn’t on the TIG team’s radar (or at least our publication schedule) at all! The trailer makes it look like silly fun, though. SIFF description: “Moritz Bleibtreu stars as a smooth-talking salesman in postwar Frankfurt who barely survived the concentration camps and wants to leave for America but not before a tenacious U.S. special agent (Antje Traue) demands to know the details behind some of his questionable wartime activities.”

1:30p: Swallows and Amazons
{Youth Jury Award for Best Feature}
Roxie Rider’s kids reportedly “wholeheartedly, enthusiastically, and loudly captial-L Loved” this family film, based on a well-known children’s book. The story concerns opposing groups of young campers in England’s picturesque Lake District who join forces to take down some nasty spies. More from Roxie Rider: “In some ways, the sumptuous, unexpectedly authentic costume and set work pulls against the suspension of disbelief required to quell the urge to call CPS on these kiddos, but for my smalls, who have little disbelief to suspend, it was a swashbuckling buffet of childhood moxie.”

4p: Becoming Who I Was
{Documentary Competition Grand Jury Prize}
I caught a regular SIFF screening of this meditative (and yes, I do mean slow, but also contemplative) documentary about a Buddhist boy in the highlands of northern India believed to be the reincarnation of a centuries-old Tibetan monk. It all ends up being a road movie of sorts, with some gorgeous scenery and a sweet exploration of unconditional love.

6:30p: Lane 1974
{New American Cinema Competition Grand Jury Prize}
Apparently this one really rubbed me the wrong way; a press screening I attended inspired for my week 3 roundup the following capsule review, heavy on salt, quoted here in its entirety. “This sun-kissed slog, based on a Clayne Hayward memoir, follows the titular 13-year-old (played with great delicacy by promising newcomer Sophia Mitri Schloss) as her 1970s Norcal counter-culture communal life is upended by her restless, generally terrible mother. Some scenery is lovely, some performances are good. But even at a slight 81 minutes Lane seems long, a missed opportunity for a great narrative short 1/4 the length.” Well, the film’s sellout crowds at SIFF sure put me in my place, and my thoughts echo Amie’s (from her NW Connections preview): it’s great that Seattle showed up so big for this locally-tied, woman-directed film.

8:30p: Sami Blood
{Official Competition Grand Jury Prize; Golden Space Needle Award for Best Actress}
Another one that we didn’t get to cover; I’m grateful for another chance to check it out. SIFF description: “A coming-of-age drama set in 1930s Sweden, Sami Blood is the prejudiced term used to describe an indigenous girl, played by poised newcomer Lene Cecilia Sparrok, who attends a state school that pressures her to break ties with her family and culture.”

4p: Dolores
{Golden Space Needle Award for Best Documentary}
Roxie Rider gave high praise to this “moving and fascinating documentary chronicling a seminal and currently all-too-relevant time in our country’s history through the story of one of its principal architects, the should-be-but-isn’t-legendary activist and mother of 11, Dolores Huerta.” She went on calls the film “a super-concentrated 200 proof Si Se Puede summons to get on our collective feet and marshal the power we hold in our hands if only we can come together and wield it.”

6:30p: In Syria
SIFF description: “In a Syrian city under siege, a mother of three (Hiam Abbass) is barricaded inside her apartment and fights to protect her family and her neighbors from the raging war outside, in this tense drama where every decision is a matter of life or death.”

8:30p: Boundaries
{New Directors Competition Grand Jury Prize}
I enjoyed this French-Canadian satire about three women (a political aide, a mediator, and the president of a tiny island nation) trying to balance their personal lives with the boys’ club mentality of international politics. The mediator is played by Emily VanCamp (of TV’s Revenge, which started out amazing but became dreadful because 22-episode seasons equal creative death), who shows off impressive bilingual skillz, which make me like her even more.

7p: The Paris Opera
O mon dieu, I liked it a lot! “Captivating, thorough, verité-style peek into a year at l’Opéra de Paris, from behind-the-scenes finance strategizing to new talent acquisitions to the backstage blotting of a prima ballerina. This is documentary proof that it takes a village — or perhaps an army — to execute a season at one of the world’s most prestigious performing-arts institutions. Francophiles rejoice!”

7p: The Farthest
I picked up a lotta positive buzz around this documentary on NASA’s Voyager space missions; it deep-dives into the shuttles themselves, the men and women who built them, and the vision that propelled them into the future. Imaginary Jean called it a “perfect film for those of use that could use a little humbling in the face of the stunning endless-ness of our universe. Can someone sneak this into our Commander-in-Chief’s Netflix rotation?”