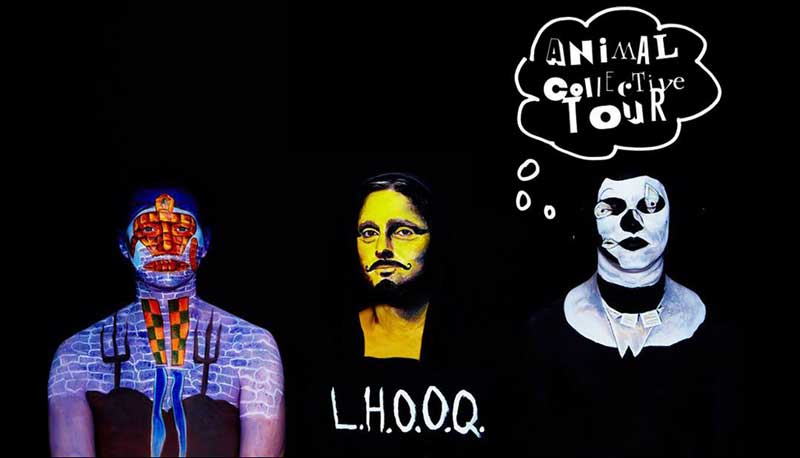 Animal Collective will be at the Neptune Theatre in Seattle, WA this Thursday, June 29, 2017. Opening the show will be special guests: Eyvind Kang and Jessika Kenney. Doors at 7pm (get tickets / more info).

Never quite raconteurs – more like your sound-drenching lysergist pa!s that make you sleep late after they’ve hung out at your place – Animal Collective can’t settle down. Word is, Danish existentialist Soren Kierkegaard wrote down every thought, keeping open notebooks around him always – on pedestals and fall desks and nearly everywhere. That’s how I picture the quarter of Panda Bear, Avey Tare, Deakin, and Geologist: Taping the spongy rotation of a half-flat tire lit with florescent goo that came from the misfit glow sticks they were using to strum half-made thoughts kept drowsy inside boxes they beat on with tuned, wet brooms. Of course there’s a guitar playing filligrees and the mouth of a cave drawing air as burbling synths gargle. And so sound and song happen.

You go to them, spiraling in. And they might be recording In the Amazon rainforest, as on their 2017 Record Store Day EP, Meeting of the Waters, or in some anonymous Baltimore band space out in soundland somewhere. The output? Always utterly visual even if you can’t tell how many people are doing the things that you think you can see based on their sound. Actually you can see the lads in the rainforest on the Viceland show, Earthworks. And you can augment that with some edibles or mind-expansive plant-life and a trip to the Neptune on Thursday June 29th.

In my mind, Animal Collective are a chemically and herbally ideal blend of heart-on-sleeve Devendra-meets-beta band pile-up, Gibby Haynes/Paul Leary mix-chaos, and a lovely, dandelion-field inspired naive folk. In practice, they’re a visual and aural wash, an overtaking of the head via the solar plexus and your quivering laundry, made billowy by pops, squally thwacks, and voices you’ll try but fail to track.