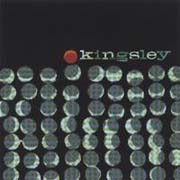 "And all the jaded hipsters / are leaning up against the bar ." ("Jilted")

I myself would tip a few and ruminate on ruined romance whilst I watched him bash out the fuzz-crunch with Hammerbox at the Croc and the Moore in the earlier chunk of the 90s . And then there was the shimmering, spiraling loops of Orbiter and its Martian martini-soul with comrade Jeff Wood and Fiia McGann at more sultry venues. And then most recently, backing the heartache of strum-and-moaner Ben London in the Sanford Arms.

Now Thurmond has a rock band — yeah, a rock band — called Kingsley, to follow up, to go with all that on his resume. "I'm breaking in a new heart / and every day is just a bit too much for me," he sings in "Stammer and Stutter," and that sense of someone who's been around the block taking another chance can be felt, as the rhythm chugs to his heartbeat.

Jeff Wood's back along on bass and backing vocals, and he's pulled in drummer Robert Dent from the Sanford Arms, and even vibrant electronica composer Billy Brush contributes (but in a tasteful, low key way — this is a rock band, as I said before). It's a spare, driving unit of professional musicians that accompany Thurmond's low, melodic vocals superbly. Thurmond's voice has aged perfectly by the way — listen to the relaxed timbre in how he opens "Bad Sake," then going up a register for the chorus, evoking emotional tension, and sliding back down for the "shoulder shrug" second verse. Sweet.

Thurmond knows he could remain a studio hermit — that he could just play his effortless lines all over other, lesser bands' records, giving them the bite and shine he always delivers for the rent and no stress. But he decided to hook up with legendary local producer and engineer Kip Beelman for Kinglsey's debut, who gives the album the same perfect-in-your-car-stereo surround sound punch he crafted for everyone from Sleater-Kinney to Ken Stringfellow, Blenderhead to Damien Jurado, even Aki-La featuring Snoop Dogg and the Dancing French Liberals of '48.

It's a Seattle thing — but it sounds big enough to leave town, too.