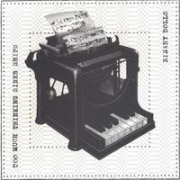 Too Much Thinking Sinks Ships

You can just imagine the Binary Dolls at a hometown Portland bar, leader Nick Jaina extrapolating near the microphone, keeping a safe distance. Paul Alcott's drumbeats are precise and carry the observations through, so their friends and the tavern fringe observers can tap their feet as they try to get the stories. The strings and keys of Matt Dabrowiak just dance around a bit in the smoke and stench of Pabst for texture. It's all about standing up through the anomie-saturated tale-telling, dodging sharp lines about awkward appetites, denied feelings, delusions of meaning in a world where you go out to see some art and rock dance with each other.

This hyper-literary, slightly anxiety-ridden technophiliac temp worker rock has unexpected charms — mostly in the twisted puns and nonsequiturs describing being well hung for James Joyce's daughter ("Lucia Joyce"), the weirdness of transubstantiation ("Sheep's Blood"), the ineffable mystique of passionate attraction ("Don't Talk To me About Love"). I'm guessing about all those topics, but hey.

I don't buy it. Someone really clever isn't trying hard enough here. This is a hobby to him, a thing to make and do. And that's cool, it's what I'm doing right here now too. But somehow, he's either holding himself back to be 'cool,' or his band-mates give him too much shit so he has to keep it all down. The ninth track, "These Are My Friends," with its bellies and knives and talk of betrayal, builds into a near-ferocity and gives the pose away. And for that, the rest can't be easily forgiven.