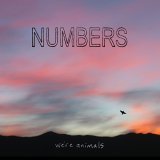 For those who wouldn't know otherwise, listening to We're Animals might make San Francisco-based Numbers seem like a fresh new band to them — but it's actually their third full release (not counting a remix album), the pleasantly grinding keyboards and guitars showing a playfulness that would betray their extensive recording and touring history (Europe, United States, and Japan — the last two coming up with celebrated noisemakers Limited Express).

The band is made up of members from Xerobot and Dynasty and Revenge and a couple of other bands, and had the distinction of causing Pitchfork founder Chris Ott to pitch a hissy fit at them for their first album (accusing them of being poseurs), a "3.3," to which William Bowers countered with a thumbs-up for their follow-up remix collection, "6.9," and then Dominique Leon got between them, complimenting the "distorted synth drones" of the band, but wishing they were a little more distinctive. I'm not sure why I mention this, other than to give the band credit for causing so much critical controversy.

From track to track, the electronic burps and screeches and soft, intelligible singing of Dave Broekema (guitar/vox), Eric Landmark (moog, "cat," and vox), and Indra Dunis (drums, vox) keep things fun and friendly on We're Animals — a rare quality in a genre (neo-No Wave?) that usually sinks murkily into vicarious 80s doom prophecies. "The most evolved beings of all live in the sun," as Philip K. Dick wrote in Confessions of a Crap Artist.

By angular, attention-grabbing track eight "Crows," with its harmonic tribal howls between unpredictable shifts in tempos and textures, this ultimately feels like a new vivid presentation of facts, a force in the world that's pulling us all together, and as the slow martial grind of the tenth song ("Time Story") attempts to pinpoint the exact dimensions of reality. The chanted unison vocals of the happy trio seem to celebrate our dimensional existence, making this party music for those who spend their waking life engaged in the dream world of cents and sensuality.