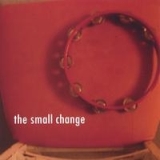 Part Fastbacks, part post-new wave Elvis Costello, the best way to describe what you'll find when you pick up this album is lots of jangly pop-rock. The Small Change is something you can listen to repeatedly not tire of because its songs fit so many styles in so many different ways.

The tenderness of "Off My Shoulder" is like a nice Black Crowes ballad without all the left over hippie residue. "If We're Ever Gonna Get In Tune" sounds like perfect cross between an old Posies record and something written by Paul Westerberg. The following track, "(I Don't Ever Wanna Go Back To) Detroit" reeks of an Elvis Costello influence, only the song's tempo is poppier and a bit faster than most of Costello's work. And those aren't necessarily the album's strongest offerings.

The standout song on the record is easily "Cheating On A Cheat." It's too catchy not to sing along to and way too infectious to not make you want to get up and dance. Tambourine, harmonica, guitar and organ collide with enough umph to make even the stodgiest listener recognize the song's near pop-rock perfection. The one knock against the album is that it sounds too much like everything else that is out there. But thn again, that's something which could be applied to a lot of records in CD bins.