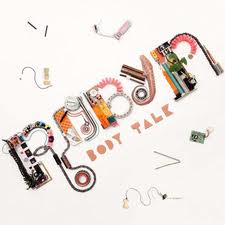 OMG! Yes, I freaking love Robin Miriam Carlsson, and have since her first eponymous release (as, um, Robyn) in the States and the 2007 sampler of her Swedish hits, bulleted up in the charts “With Every Heartbeat.” I left this album, Body Talk, a collection of two separate releases earlier in the year, off my TIG 2010 favorites list because I hadn’t had this super consumer-friendly marriage of both albums yet. Now that all the songs are together, and each one is a chrome-wrapped chocolate-covered hit of dance-demanding bliss, I have to hype it here.

In the surreal stew of pop-art and art-pop, we kids in the Madonna generation used to wonder if rumors that The Clash and Elvis Costello really loved ABBA as much as they claimed were true. Eventually, a gal born in 1979 is likely to come along in the mid-90s and start writing songs as smartly narrative, anthemic, sarcastic but sweet, visceral and science fictional, and cool-quirky as a perfect combination of post-punk and lushly-created chart pop might be.

Lyrically, though everything here is insanely catchy and reasonably slick, Robyn should not be taken lightly — “In My Eyes” is an awesome message of grace in an up-and-down relationship, as adorable as her nurturing a bad-ass boy hobo in her previous “Bum Like You.” “We Dance To The Beat” and “Don’t F***ing Tell Me What To Do” are cyberpunk story songs done in minimalist list form, a favorite trick of Robyn’s (there are times that her lyrics seem like a combination of Bob Dylan’s personal-political protest with Laurie Anderson’s conceptual skills for placing you attention-ahead square in the receiving end of what she’s saying).

There are so many funny lines in a prime Robyn song I wouldn’t know where to begin to quote. Might as well just type out all of “U Should Know Better,” her absolutely tummy-tickling rap-duet with Snoop Dogg. Royksopp joins in as well on the less hilarious but still very clever “None Of Dem,” too. Robyn sings about her love for losers with charm, her hatred of players with smarm, her joys of drinking cheap wine on lazy days with arty, slightly thuggy friends on the verge of eviction. Cops aren’t her friends, it seems, even if she’s cute and can scam some money to look legit. That’s saying something in these days when everything’s moving black market and a police state may be just around the corner in post-Bush world.

But back to the music: “Indestructible” is absolutely gorgeous, its vulnerability vibrant beneath the sweep and swoon of its beautiful arrangement. Even less mind-blowing, but still realistic odes to romantic unity like “Love Kills” and “Hang With Me” are constructed as perfect electro-pop confections for Robyn’s ardent confessions. I would love to see her stretch out beyond the keyboards a bit, but those are probably less damaged by sweat and body heat than acoustic guitars and strings when she performs all this live like a fiery dynamo.

The great thing is, even if you never see her burn up a stage, her music takes the hipness of Ciccone Youth and brings out the total diva in it. Who would have thought, in 2011, that we’d have such a fierce combination of goodness (lots of heart), greatness (powerful music), and goddess (*sigh*)?