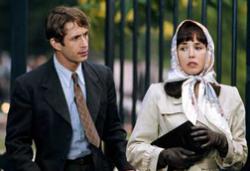 I love me some cinema, but it's only once in a great while that a film like Bon Voyage comes along to remind me just how much fun the movies can be. As I write this I'm still abuzz with its sweeping nostalgia, its wealth of giddy thrills, its broad and glorious old-school entertainment.

The possibility of war is on everyone's mind in early-'40s Paris, where glamourous movie actress Viviane Denvers (Isabelle Adjani) has been tied to a mysterious death. After she slyly convinces gullible longtime friend Frédéric (ridiculously good-looking Grégori Derangère) to help, an unfortunate series of events winds him up doing time for the murder; Germany begins its occupation of France several months later as he and street-smart prisonmate Raoul (Yvan Attal) make a daring escape.

On a train to Bordeaux, Frédéric and Raoul meet Camille (Virginie Ledoyen), who's preparing to meet her physicist mentor (Jean-Marc Stehlé) and travel to England to make a top-secret delivery. Sneaky ol' Viviane happens to be around, and her new politician beau (Gérard Depardieu, whose nose is looking more and more like a lopsided ass) is almost as interested in this mysterious MacGuffin as journalist-with-a-secret Peter Coyote. Characters lie and fight and get in car chases, jump through broken windows to make daring escapes, deceive and plot and look at one another longingly across gracefully-appointed halls. It's just beautiful, and I loved almost every moment.

This is an elegant suspense yarn that successfully conjures the grand spirit of 1940s French melodrama with striking widescreen detail. The uniformly excellent performances remind us that this is a throwback, and provide occasional po-mo comic relief — especially 48-year-old Adjani (playing a 25-year-old actress, overwrought and histrionic in a role that requires it). Her character's scheming ways come to an abrupt end with a profound moment of realization framed in a bustling park; she's surrounded, yet solitary.

It's a big movie with many elements to juggle, but director and co-writer Jean-Paul Rappeneau (who directed Juliette in The Horseman on the Roof) pulls it off in high style. With Bon Voyage he gives us a film like the ones they just don't make anymore.

Southern Italy, summer 1978. Gorgeously sunlit wheatfields surround a group of young friends as they ride their bikes, race to an abandoned farmhouse, and challenge one another with shocking dares: all familiar routines, spiked with the easy cruelty of children.

Viewing these young'uns at carefree play in Io Non Ho Paura ( I'm Not Scared), one eventually gets the eerie feeling that there's something sinister about all that wheat, a desolation and contempt swallowed by the idyllic panorama. Then our protagonist, a 10-year-old boy named Michele (Guiseppe Cristiano) stumbles upon something very disturbing, the implications of which will eventually rob him of his innocence: a frightening mess of a boy named Filippo (Mattia di Pierro), brutally held prisoner in a deep pit.

This discovery provides an initial jump-out-atcha scare (a big woman at the screening I attended let rip a hilarious shriek), but any worrisome anticipation of standard-issue horror is swiftly quelled. The boys become friends (despite poor Filippo's incoherent musings about raccoons and biscotti), Michele and the other kids learn some tough lessons about their mamas and papas, and it all culminates in a luminously heroic after-dark journey with the creatures of the night coming out to see Michele on his way.

This is a lovely-looking film, with assured direction (by Oscar®-winning Mediterraneo helmer Gabriele Salvatores) and all-around wonderful performances. The resilient preciousness of childhood is captured uncannily, and most impressive to me is Michele's younger sister, a sassy lil' hoot with big-ol' glasses and a raggedy one-armed Barbie®. (At one point she claims to see a dog in the yard that no one else seems able to distinguish — a scene astonishing in its subtlety. It alone is worth the price of admission.)

I won't give away the hows and whys of the crimes against Filippo, but suffice it to say that every child is somehow betrayed. Perhaps this is the moral of the story, but don't let that frighten you away: the true beauty of I'm Not Scared will reward and enrich you.

SNP returns to its original performance space (the U-district's HUT) for a brand-spankin' new run, continuing in its auspicious quest to bridge the synaptic gaps 'twixt film, live theatre, and improv.

Based on a theme determined by audience suggestion, SNP shoots, scores, edits, and projects an improvised movie before your very eyes. The insta-flick that resulted from a recent Friday night performance was named (with help from… ahem… yours truly) Googly Eyes (uh, don't ask), and involved three separate vignettes that (kinda) merged at the end:

This was my favorite Neutrino performance to date. Yeah, it was even better than Sleep (from last year'sTide Me a Prince (from the more-recent February show I attended). Section one in particular was a blast, with Fringe Fest run) and Órla McGovern and Joel Dale brewing up some extra-kooky scenes of cheesy faux-suspense.

As always, the apprehension/anticipation of never knowing what you're gonna get is what makes it all such a hoot. SNP is as brilliant and fresh as ever, and I'm pleased as punch to see this talented lot performing semi-regularly.