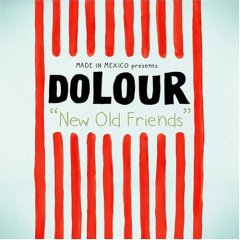 When the indie music revolution comes it will be warm and breezy. Sweet smelling sea air will fill our hair as we drive our convertibles into the twilight, engine in harmony with the sound of the ocean waves. And our car radios will be playing Dolour. No more grunge retreads and pop shtick, just wholly vital and highly individual music — the stuff that New Old Friends is made of.

Dolour is Shane Tutmarc. When playing live Tutmarc is backed by a rotating cast of musicians including Paul Mumaw, Craig Curran, Charlie Larson, Eric Howk, and Phil Peterson. But for this third album he plays all the instruments, does all the recording, and releases it under his own label. It is the very definition of independent music.

It's easy to see how this staunch independence might be a reaction to the sucky relationship Tutmarc had with the label that released Dolour's second album, "Suburbiac". The bitterness comes out on tracks like "I smell a lawsuit" which I can only guess is an angry letter to his former label.

"I never have time to stop and think
Who even owns the songs I sing?
It's time we read the fine print
Who wants to be a superstar?"

But what's really amazing about New Old Friends is the incredible range of sounds and depth of emotion. Tutmarc uses every hook and flourish in the Book of Pop to realize an utterly unfettered expression within a highly controlled structure. On its surface complex harmonies are punctuated with falsetto frills, but lurking underneath is an emotional richness. [Alert: potentially misleading band comparison in the next three sentences.] It is impossible to listen to New Old Friends without acknowledging the similarities between Dolour and Brian Wilson and The Beach Boys. Like The Beach Boys, Dolour is all about ultra-pop ingenuity, vocal harmonies, and musical range. And like Brian Wilson, there is a dark undercurrent that brings depth and complexity to the music.

"Cheer Up Baby" is my favorite track (this week) and a great example of the relentlessly sunny juxtaposed with the sad. Musically it will turn any foul mood into a bright one. I'm pretty certain if I could turn the volume loud enough entire weather systems would change from rain to sun.

Overall these hiccups don't distract from an otherwise brilliant release. Props to Dolour for giving us the perfect soundtrack to our springtime adventures in the sun.