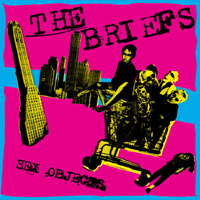 About five years ago, I met my best friend Anne, a self-described addict of 1970s-era punk. And not only is she a completely rabid fan, but she's also all about getting other people to understand punk's majesty as well. As such, she took it upon herself to enroll me in her very own DIY School of Punk Rock. On a winter evening in 1999, she handed me New York Dolls, Television and her copy of Please Kill Me: The Uncensored Oral History of Punk and told me to come back for more when I was done. By the end of the week MC5, Richard Hell, The Clash, The Jam, and The Stooges were ringing out from my speakers. Thanks to Anne's thorough tutorial in British and New York punk rock, I myself became obsessed with the era and truly appreciate all of the great bands making music now that are bringing true punk rock back into the musical vernacular.

And The Briefs, Seattle's own punk rock darlings, have been doing just that for several years now. Their latest LP on BYO Records, Sex Objects, waves the punk flag high and clear. "Sex Objects" is the musical equivalent of ADHD — frenetic, hyperactive rock that dares you to sit still. The incessant cymbal-driven rhythms and impossibly hooky punk-bright guitars seep into your very bones and compel you to dance along.

The combined talents of Daniel Travanti, Steve E. Nix, Lance Romance, and Chris Brief on vocals make for anthemic choruses — calls to arms for the future of punk. Gravelly growls, poppy cheers, and Lydonesque sneers pile together, each enhancing the next. I especially liked "Mystery Pill" — bouncy and ecstatic, its chorus reminded me of The Jam with a raw twist. The pace is unrelenting, the cymbals will ring in your ears… and you'll be loving every minute.

The songs are straightforward, uncomplicated doses of pure punk energy. But just because the songs are brief {funny, that} and hyper, don't think for a minute that "Sex Objects" lacks substance. Tracks like "Orange Alert" {a not-so-subtle stab at the Bush adminstration's laughable Homeland Security Advisory System}, "Destroy the USA," and "No More Presidents" show that not only do the Briefs know how to rock, they're keeping alive the punk tradition of political engagement through music. If you already know you love punk, "Sex Objects" is made for you. And if you just don't realize that you love punk yet, a copy of "Sex Objects" paired with a thorough reading of Please Kill Me will start you down the incendiary path of punk rock higher education.