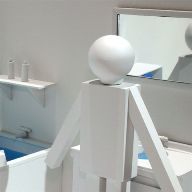 A press photograph of Broken Spindles is Joel Petersen — a lean man with confidence for an expression. His stare is like that of an architect's standing before his finished skyscraper, or the look with which a painter examines the expression of the rich heiress as she inspects the mural she commissioned for her entryway.

Joel Petersen, however, stares into the camera as both the painter and architect of the rich tones in Broken Spindles' newest album, Fulfilled/Complete. His day job finds him as a member of The Faint, providing his electronic musicianal prowess as a garnish to the band, rather than as the entire entrée as it is presented in Broken Spindles.

The record is as confident and lush as the expression on his face. Mature in its composition and complexity, there is as much mystery and confliction to be found within its layers of electronics as in the dark closets in any one person's mind. There is something revealing about the record, but it is hard to find. A listener can effectively take whatever it is they are looking for from the music, but to do so one must work hard. This is much more of a winter record than summer record, but summer's winter is a 3AM drive home, for which this album is well-suited. To fully appreciate the record one must pay attention and search for something, anything, right along with Joel. Whatever meaning or enjoyment you get from listening to music, it can be found in these recordings. But your experience of Fulfilled/Complete will only be as fulfilling and complete as you decide to make it. If you're a big fan of The Faint, then it will not be hard work.