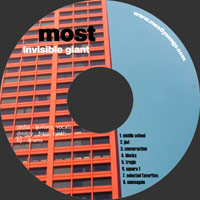 {note: it turns out that, in true DIY fashion, the copy of Invisible Giant that landed in my lap is among a small percentage of Most albums that were distributed with the first and last songs transposed. As you read the below review, you will no doubt notice that this seemingly trivial mix-up has a significant impact on my opinion of the record. So I have compiled a few notes to point out some of the key differences between what I have led you to believe and what is actually true}

Clocking in at just over 10 minutes, the opening track on Most's self-released LP, Invisible Giant, means business. While initially coming across as standard bubblegum pop, within the first minute "Middle School" metamorphoses into a swirling psychedelic ode to the heavens, replete with tremolic guitar, plenty of synthesized bleeps and whirs, and vocals no doubt filtered through an effects pedal set to coo. If you were ever to fall into a morphine-induced slumber and find yourself dreaming of My Little Pony, you would find that "Middle School" is the soundtrack. {note: to recap the above note, the song I was referring to here is in actuality the last track, "comeagain." Interestingly, though, when the actual "Middle School" starts off the album, it still initially comes across as standard bubblegum pop; unfortunately, that's because "Middle School" is just standard bubble gum pop (being a song about middle school, composed by high schoolers intentionally trying to sound immature). So instead of immediately intriguing the listener, the song immediately informs the listener that this is a very young album that should not be considered too heavily.}

But it doesn't stop there. No, this song is an adventure, and by the 3:30 mark, the dreamy quality has given way to something with a bit more urgency, as if the song's own subconscious has taken over to get things moving, to remind Alice that she has to find a way home somehow. And finally, in what this jaded reviewer would consider a musical strategem far too advanced for such unseasoned players (which reminds me: why is every flippin' CD that comes across my desk these days put out by teenagers? Why are they suddenly so goddamned talented?), they fall dead silent for over a minute before creeping back into your psyche with an epilogue founded in restraint. As a whole, "Middle School" could be considered an event; getting through it is an accomplishment for which both the players and the listener should feel proud. {note: Hindsight, it turns out, really is 20/20. It is painfully obvious when reading this that the song I was so enamored with was meant to come at the end. Astute readers will have surmised by now that the minute of silence punctuated by slight return is not actually an artistic statement but instead is simply a bonus track. It's still a fine song, even as two songs, but it doesn't pack quite as much wollop at the end as it did at the beginning. As a closer it's not quite over the top enough to meet the unfair expectations that I set for it as an opener. This I know is not the band's fault, but still — knowing what they are capable of, I expect more.}

I know, I know — two paragraphs is a long time to spend on one song. But A) the song warrants it, and B) I wanted to give credit where credit is due before lamenting about the relative lifelessness of much of the rest of the album. Yes, there are highlights, notably the second track, "jlot," which packs all of the intensity that "Middle School" did not, in effect completing the journey by pumping life back into the album. And really, the next two songs, "conversation," and "block" are both solid pop numbers. "block," in fact, is really good. It's reminiscent of all those post-new wave songs in the 80's that all seemed so urgent and sophisticated to my 10-year-old brain. {note: here is where the restructuring of the album really starts to make a difference. Since the actual "Middle School" is a quaint novelty at best, the album doesn't start off so heady, which actually makes the next few songs even better. "block," with its syncopated guitar and bassline of pure funk, is allowed to step out into the spotlight where it belongs. "tragic" also turns out to be a good song (I have no idea why I hadn't noticed before the long, swirling, mostly instrumental coda reminiscent of every single one of my favorite bands).}

Unfortunately, it seems that Most ran out of ideas halfway through the making of this record. The last four songs all just feel thrown together, with lackluster melodies and even lackerlusterer vocals. It's just not as fun as the first half. Either that or it's just plain pop music, which I despise. Whichever it is, the sad fact remains that every time I hear closing number, "comeagain," I find myself skipping back through the other songs, swearing to myself that they put the song on here twice (I am now 90% sure they didn't, though). {note: Okay so is it weird that when I came to the last song (now the first song) I felt like I'd heard it before? Is that some kind of premonition? Creepy. I know now that it is only on the album one time (which still might be one too many — sorry kids, but you've got to let that one go). Obviously the entire dynamic of the album has changed at this point, and instead of having a great first half and a forgettable second half, it now has a 'cute' start, four solid tracks, a couple of mediocre ones, and an epic finish, which makes it at least as good as any other pop band.}