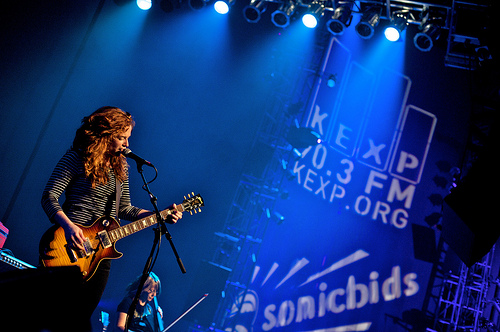 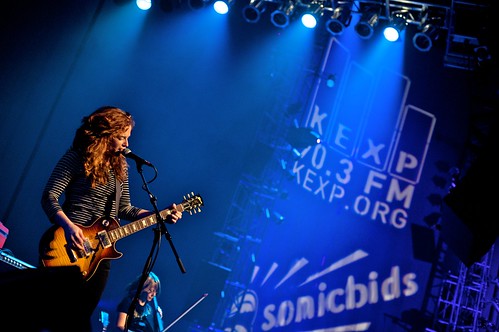 {Her Majesty herself, Rachel Flotard, by Steve Louie}

We may be almost a week out from the crazy weekend known as Bumbershoot, but that doesn’t mean we can’t gush about our favorites and relive the magic as we head into a dreary fall weekend. All photos by Steve Louie.

1. A double shot of Visqueen with a hint of Neko Case 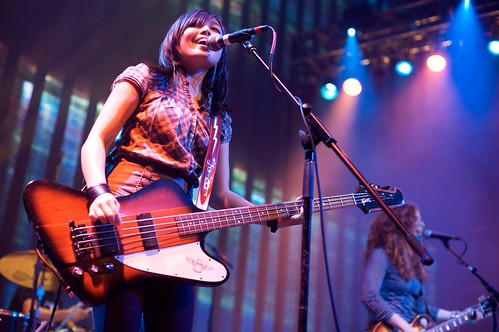 What a lucky day to get to see one of Seattle’s best bands twice! For those lucky enough to get tickets, Visqueen played a KEXP lounge set early Saturday afternoon, and ended with an almost a capella version of “So Long”, all harmonies and cello which had me in tears. Here’s a video of “Summer Snow” (complete with typical jokes cracked at drummer Ben Hooker’s expense) from the same set, which will give you an idea as to how emotional and amazing Visqueen can be turned down. KEXP is still streaming the whole set on their two week streaming archive, so I highly recommend taking a listen.

Their sold-out sky church set on Saturday night was one of the best sets I’ve ever seen them play, kicking off with an oldie (“Blue”), and ramping up through all the favorites new and old. Rachel Flotard’s voice sounded more powerful than I’ve ever heard it before, which I have to imagine comes in some part from Visqueen playing shortly after Neko Case’s rip roaring-shiver giving set at the main stage (Rachel has sung with Neko many times, and Neko is featured on Visqueen’s last album, Message to Garcia). While neither made an appearance at each others show, as much as I’d wished that would happen, Neko Case is such an amazing performer that I’m sure a little bit of her magic was in the air, making everything a bit more wonderful (though I heard the same did not work for Bob Dylan).

Visqueen closed the set with the world premier of their new video for “Ward” on EMP’s big screen, possibly forgetting that Sky Church’s screen contains very thick black bars which make it difficult to watch anything but screen saver like swirly lines behind a set. While it may have been a slightly distorted image, it was amazing to see Rachel Flotard being her wonderful self on such a large screen. I think it’s a feeling we should all get used to.

2. BOAT prove their age in the best way possible 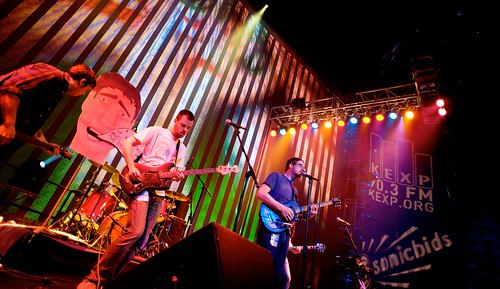 BOAT is a band that TIG often gets credit for nurturing through their sloppy pop twee days (as I’ve only been a part of TIG for the past few years, I take absolutely no part of this credit). I’ve been religiously seeing BOAT shows now for over 4 years, and for the most part, each show is better than the last, with their sound growing more towards Guided by Voices and Pavement hits than their days with xylophones and and quiet ba ba backing vocals. Monday’s packed Sky Church show proved no different. Featuring typical D. Crane designed sets (a large head with many different speech bubbles that I’m pretty sure they called Tom Hanks), the band featured a handful of new songs from their new LP coming out next March as well as a very well rounded set of songs, reaching back to one of my old favorites, “Last Cans of Paint”.

At one point, someone shouted out “How old are you guys?” in typical bumber-audience fashion, which D. Crane had no answer for, but then introduced the next song as being a tribute to Neil Diamond, essentially answering the guy’s question. BOAT are a band that I’ve always liked best in small, no pressure settings. Sometimes, they don’t handle the big stage well, and an hour set can drag on a bit long for any band, however, they blasted my incredibly unfair low expectations and played one of the best sets of their career to a very receptive audience. They’ve grown up well into a full fledged power house of a band, and I couldn’t have been more proud of them. 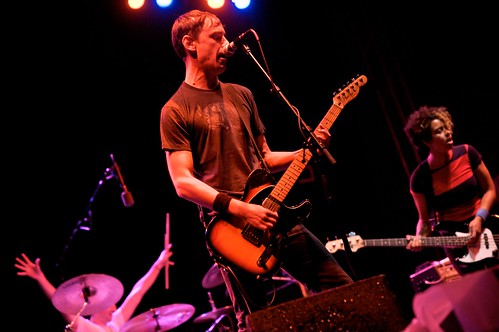 Monday at Bumbershoot was a reminder that we live in Seattle, and sometimes the weather sucks. To be honest, I left for a few hours, and wasn’t even sure if I was going to make it back. I normally never turn down a Thermals show, but I was depressed about summer ending and contemplated just wallowing at home with my cats in front of the tv. However, my senses came back to me, and I grabbed a warm coat with a hood and went back and planted myself right up front, getting there just in time for sound check. Once I saw them on stage, even just at sound check, I knew I’d made the right decision. Thermals forever, and fuck anything else. As the Thermals would say (if you read their twitter ), fuckin bad (best new slang for “awesome” ever).

Their set heavily favored the new album, Personal Life, which came out just a few short hours after they left the stage, including the new single “I Don’t Believe You”, which I’ve been crushed out on for a while. I’d caught their KEXP set earlier in the day, and wondered if maybe this new album was just a bit more lackluster, and maybe the energy of earlier Thermals had just been a by-product of youth, and that everyone grows up eventually, but thankfully, I was wrong, and like most bands, it just takes a bit of night time and an excited audience to keep the energy as raw as it ever was.

As the set was drawing to a close, they said they had a few more left, and they were going to go off stage, and come back and play one more (I always have crushes on bands that point out that the encore ritual is a bit silly). When they returned back on stage, still soaked and freezing from the windy rain, they kicked into a brilliant cover of Weezer’s “My Name is Jonas”, playing it better than Weezer probably did the night before. Thermals forever, fuckin bad. 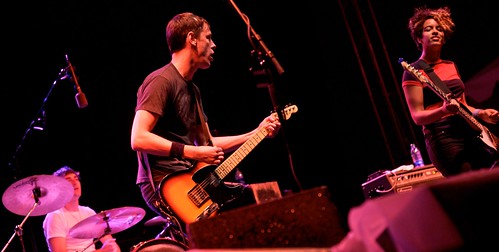