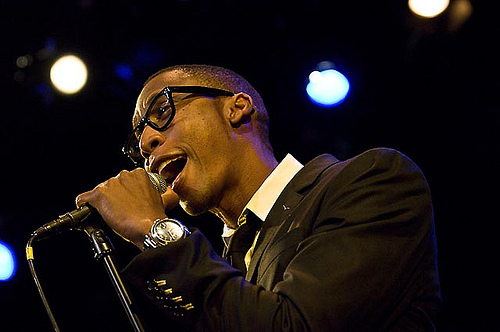 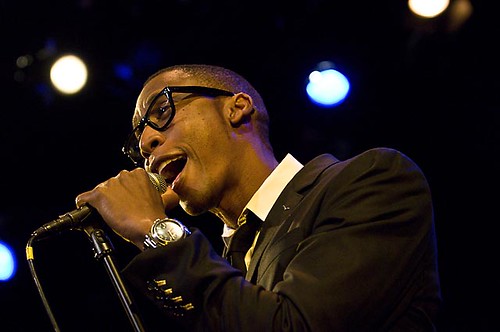 Update: I took down my crappy cell phone photo of Raphael Saadiq because superstar photographer Jason Tang just uploaded an awesome one.

So… How’s Bumbershoot for you all?

For day two, I had a busy day, running from show to show. My schedule put me from The Kindness Kind to Spencer Moody’s literary program, The Enablers Have Spoken, to The Yeah Yeah Yeahs to USE to Raphael Saadiq in the KEXP lounge to Sleepy Eyes of Death to my apartment for a brief break and back to Bumbershoot for Raphael Saadiq again.

I enjoyed everything I went to, but seeing Raphael Saadiq twice was the definite highlight. In the KEXP Lounge, he and his full band was in uniform, in suits looking sharp for a radio appearance. Both sets were full of Motown-era soul backed by a tight and funky band (two backup singers, a trumpet, saxophone, guitar, bass, drums and keyboards). He is such a charismatic performer that you believe all of the love the audience had for him was mutual. He played for ninety minutes, including two encores, because the crowd didn’t want to let him leave. My favorite thing he said (actually, I think he said it both at the KEXP Lounge and on the Fisher Green Stage) was that he wrote his song “The Big Easy” as a tribute to Hurricane Katrina victims and said that the people of New Orleans like to party when they mourn.

Today, I’m most excited for Metric, but have another full day of running between stages.