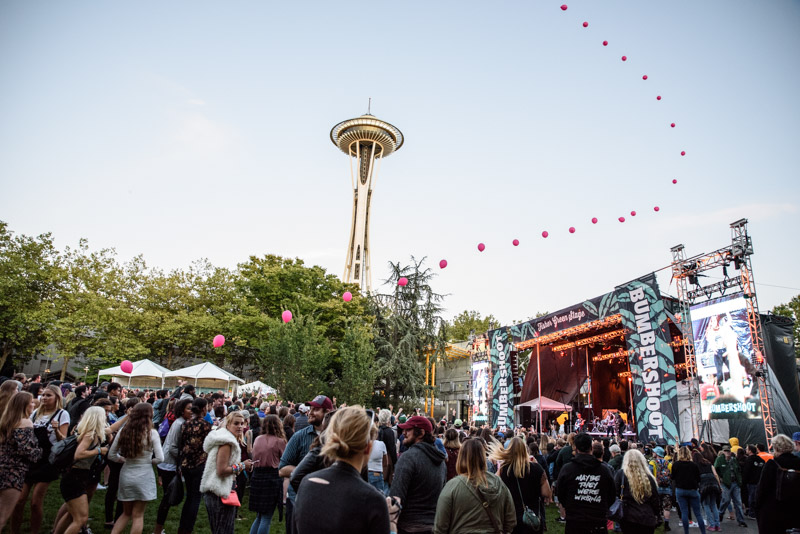 Bumbershoot 2016 Day 2: JoJo makes a teenage girl of us all.

I am quickly starting to measure this weekend by the level of health I feel, yesterday being two American beers, or, medium. We had so much fun today, in part thanks to a much-needed dance party and also Reggie Watts (in general, as a human, for existing).

Like all cool things, I come into this one late. I got to see Pony Time for the first time at what happened to be their last show at KEXP. “Is it bright enough in here?” Stacy Peck prodded between songs—yeah, a little too bright. Unlike most shows I’ve seen so far in the Gathering Space, the venue felt a little too well-lit and a little too cavernous for what should have been a cozy, dark, and sweaty set. I guess we all have our preferences

If I were to imagine a scene in which I’m listening to “Don’t Mind if I Dew,” “Bad Behavior,” and “Really Nice Guys,” it would have been while driving past a cornfield, windows rolled down, in a ’79 Ford Ranchero. (Coincidentally, I do have a friend who owns one, and thus can make this vision come true.) Stacy Peck will continue to drum for Childbirth, and Luke Beetham to sing for Stallion, which I’ll probably start seeing more of, given that I will follow his Mick-Jagger-sized crooner anywhere now. These two just embody what rock is all about.

When Daniel Armbruster took the stage, his opening call rang out: “Ladies and gentlemen, please rise for our new national anthem.” This little twerp! The girl in the crowd behind me said it better when she described him as the “embodiment of Portland, but like, nerdy tech Portland.” I can only describe this performance as “extremely ironic.” I honestly could not tell sometimes whether they were loving on their fans or making fun of them, but this seems par for the course for a band that released a “new” 10-track album (SWISH) trolling their listeners, featuring nine repetitions of the track “Destruction,” and one actually new track called “Life in a Bubble I Blew.” Y’all are zany. Verdict: Hot Chip-esque but not Hot Chip.

How do you even explain Reggie Watts?? I love him. Although I could easily just listen to him for his unorthodox loop-driven tunes (backed by an incredible soul singer’s voice), what really gets me jazzed is his between-song banter. A (slightly paraphrased) Exhibit A:

Reggie: Just wanna say thanks for talking to old store owners and really knowing the history of the place, and really integrating with it.

Capitol Hill Programmers Behind Me: [ LAUGH AT A GREATER MANIC LEVEL, MISSING THE JOKE? ]

Reggie: Lot of new buildings going up, too. Make it look like Vancouver out here. Can’t wait until they knock down the Space Needle, finally.

Capitol Hill Programmers Behind Me: [ LAUGH SO LOUD A TEAR FORMS IN THE EARTH, SPEWING FORTH A HUNDRED WINGED DEMONS ]

This guy can drop lyrics like “Imma take your momma to the Marriott and wear her out,” and still look so gosh darn adorable. He legitimately looks like he’s having so much fun on stage it’s hard not to have fun too. More than that: his eclectic set of skills (genre-busting drummer, singer, rapper, and bandleader) make him interesting to watch. There was nothing packaged about this set.

HOLY SHIT GUYS. I didn’t even know how excited I was to see JoJo until she came out on stage and I screamed like a goddamn teenage girl. In 2004, when her first hit came out, I WAS her target audience: a teenager who did not know how to style her hair, had a crush on her chemistry partner, and was terrified of getting called on in class—basically: surviving high school. I’m not gonna lie, I think I almost cried a little when she started singing “Get Out.”

But this wasn’t just about 2004 JoJo! She was out there to prove 2016 JoJo is just as good. She is clearly a grown-ass woman: this was made evident by her level of body-comfort as she gyrated up and down the stage, slapping, caressing, and otherwise calling attention in various ways to her hoo-ha (that means “vagina”). Dang, girl. Get it. Her newest single, “Fuck Apologies,” is a collaboration with Wiz Khalifa. She likes this word a lot, which I appreciate. Some other choice lyrics where it is featured: “Fuck that new girl that you like so bad. She’s not crazy like me, I bet you like that.” JoJo is still preachin’ to her people.

As the entire crowd sang along to “Too Little Too Late,” the 2004 version of me rose up like the ghost of Christmas past to say: hey girl, you’re doing just fine.

From the time that I discovered Jagwar Ma (that morning) to the time that their set finished, I can say I am a believer. While ten million people gathered at the foot of Macklemore at the main stage, we scooted over to Jagwar Ma. Their brit-pop-y strobe-streamed electro got us dancing HARD, and I mean dancing like that one person in the crowd who is dancing alone like they are having a fucking party of one and you’re like WOAH what’d they take—that was us! We were those weirdos! Their rave/rock mishmash was a thing to be witnessed. Especially loved “What Love” and “Say What You Feel.”

RUN THE JEWELS, BLACK JOE LEWIS, EXPLOSIONS IN THE SKY

Killer Mike went into full “beast mode, bitch!” We were informed the tambourine player in Black Joe Lewis was thankfully not injured in the course of his very hard rocking. Explosions in the Sky closed out the night and made me feel all my feelings, and possibly reconsider one or two floating paramours.