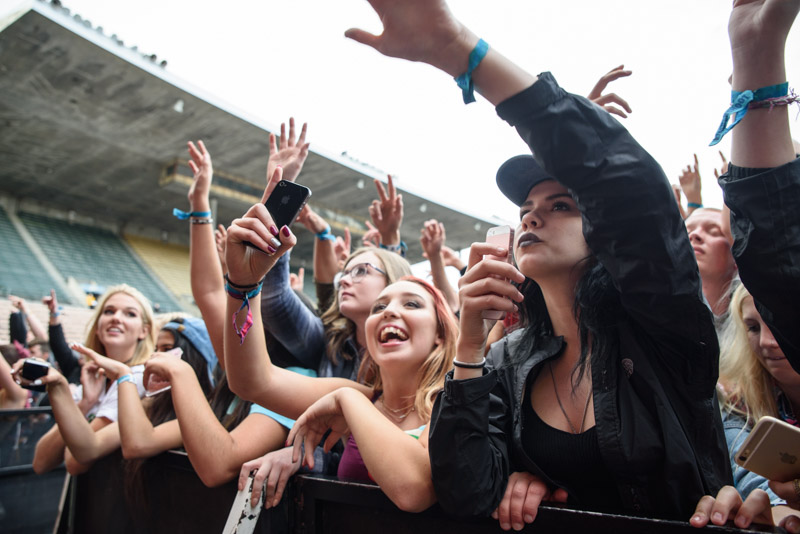 Bumbershoot 2016 Day 1: We are definitively not “soft-dick trash.”

After spending a whole week sick and struggling to keep most of the contents of my nose in my nose where they belong, we kicked off our weekend at Bumbershoot! It rained, it was sunny, it rained again but lighter, it was patchy sun, it was rainy, it was HOT SUN… you get the picture.

Besides the sun and rain and music, this first day was filled with another common thread: “Remember when Bumbershoot used to cost four pennies and a long walk uphill both ways in the snow?”

To get serious for a moment: I have mixed feelings on festivals. I have mixed feelings because of the simple fact they are cost prohibitive and will, no matter what their price point, exclude a large portion of people, often the fanbase that built them. Although many of our local festivals still tout a large percentage of performers as being local—believing they are doing their due diligence—the truth is a lot of local people can’t afford to see them. The Bumbershoot lineup is the best it’s been in years, but a lot of its longtime-attendees may be missing out due to the simple fact it’s also the priciest it’s been in years.

Take this with a grain of salt, but I can say I noticed the population of festival-goers made up of two main groups: grown-ass adults who probably share a boat with three of their friends, and hordes of the overindulged white teenager.

Mixed feelings aside, the music was still so good.

First: some asshole lady filmed the first two full minutes on her huge phone right in front of my face. This is such a peeve. Like, what are you going to use this video for? Are you really going to watch this later? Are you going to make your friends who couldn’t come sit through watching this later? That makes you a bad, annoying friend. UGH.

Besides this asshole lady, it was easy to get swept up in the wah-wah funky frenzy of Fly Moon Royalty. They played hits like “In the Woods,” from their first self-titled album; “Funky Shoes”; and some from their newest Delicious Trouble album. Every track is carefully crafted to provide back-up to their soulful, truthy lyrics: this is really where they shine. While they are very much in the funk/soul vein, their layered sound is still surprising and modern. Lyrics serve to remind us they are borrowing bits and pieces of an old sound to tell a new story: “no more text messages / no more emoticons”–GURL, I am feeling this hard.

Really enjoyed listening in to the conversation between two dudes behind me that led up to his performance, the chief opinion being, “His raps are fucking weird, dude.” It’s true. With lyrics like, “rape a pregnant bitch and tell my friends I had a threesome,” his lyrics are fucking weird and, at times, incredibly aggressive. Following the release of his latest album Cherry Bomb, the UK joined New Zealand in banning him after protesters accused him of promoting violence against women. But the lyrics, crass as they may be, are flippant and humorous, blurring what’s deemed acceptable to say out loud in the way that many stand-up comedians do.

All I’m gonna say is he is a dynamic as fuck performer and it’s my hope against hope that his lewd absurdity comes from a self-aware place, because this dude is still crazy fun to watch. Seattle is “so clean,” he said as way of greeting, and “all the white people are so nice.” (A sea of white hands raise to agree.) From his first song to his last the energy stayed sky-high and proved to Tyler and us all that Seattle wasn’t, as he thought it might be, some “soft-dick trash.”

Sometimes you go to the wrong stage. WHOOPS. However, I was pleasantly surprised by the indie beach pop of Coast Modern. I only wish the sun had been out for a band that immediately made me want tacos and icy cold drinks.

They get a special shout-out here if only so I can say how deeply disappointed I was by this show. Goddamn this was the worst shit I have seen in a long while. Lured by my love for their pop-synthy hit “Closer Than This,” I entered into the crowd with my mind open and ready to receive only to be quickly assaulted by an overly manufactured performance led by a yacht-rock dressed motherfucker.

From the banter on stage to the frontman’s dip into the crowd to sing “Love Somebody” (a love song surely meant to get some ladies weak in the knees), a sickly sweet string tied together what felt like a check-list of belabored performance to-dos. Just no.

It took some cajoling to get me to stay until the end of the day given my increasingly snotty nose, but I’m glad that I caught some of Father John Misty’s folksy antics. His music is among the only that can make me feel like I’m falling in love and getting dumped at the exact same time. I think because he so elegantly captures this bittersweet truth: that so many of our best feelings are only fully recognized because of the lived terrible ones informing them.

He’s mesmerizing to watch on stage. Strikingly tall in a dark suit and those goddamn sunglasses, he fluidly switches from cool rock god to flouncing preacher. One second he’s standing, the next he’s on the floor. Though his lyrics are not always inspiring, they are incredibly sincere. His complicated persona was on full display for the length of his performance—and it is, always, hypnotic.