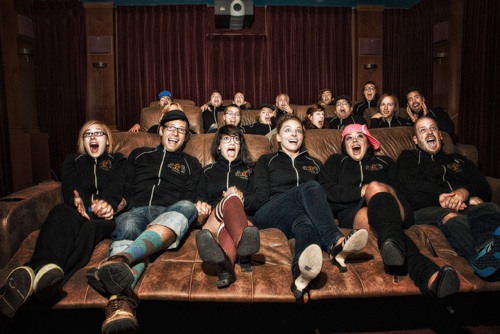 The Beta Society’s been getting a ton of press lately, so no doubt you’ve heard of them – they’re the group of friends who rented an 80s style mansion so they could live together 24/7 for the express purpose of creating stuff. What kind of stuff? It’s a little hard to explain (and much better to see live), but basically they make hilariously great films and sketches, and when they do it live, they put it all together in a sketch-style variety show that includes both.

“Headmasters” Celene Ramadan, Annette Auger, and Jessica Aceti are the awesome chicks that formed The Beta Society in 2008, and in addition to running a kick-ass group of Betas, they’re just an awful lot of fun to be around (back in the day when I was a frequent improv/comedy/theater-goer, I got to know Ms. Ramadan pretty well, so I totally know. Seriously. They all rock!). Some of my favorite bits include a fascination and collaboration with Alan Thicke (yes, that guy from Growing Pains), and the fact that they made their own feature-length horror parody called Junkbucket:

Don’t miss ‘em, you guys. There’s nothing else quite like this in Seattle.

{The Beta Society performs at Bumbershoot on Monday, September 7 from 1:14-2:15pm on Comedy Stage West. Photo by Cory Gustason.}