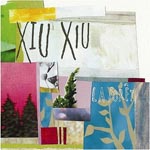 Rarely do you find the phrases "heart-felt vocals and lyrics" with "experimental electronic" when you're outside of Björk's hideaway. It's a dangerous world, as you can easily frighten people with sonic adventures even before you get to the gut-wrenching lyrics about death, pain and the general misery of life. Yet, this is where we find the latest release by Xiu Xiu (aka Jamie Stewart), La Foret. It's a tormented journey into his psyche, like Conor Oberst on an all-night bender in a recording studio with Richard D. James. La Foret is much more subdued than previous Xiu Xiu albums, but with it comes a very focused disposition to the disc.

The foundation of La Foret is the ominous moods set by the musical arrangements. It is difficult to treat Stewart's vocals as separate from the music, much like Sigur Ros or the Icelandic majesty herself, Björk, who interweave the vocals as an instrument in itself. The wounded and earnest style of singing is almost too intense when you start listening to the lyrical content. It's impossible to just keep on living whispers Stewart on the opener "Clover," a track reminiscent of Bright Eyes' "Don't Know When But a Day is Gonna Come," and you can believe that Stewart might mean business.

In possibly the most upbeat track, "Muppet Face," (it seems like a harmless enough title) sounds like the bastard son of Drukqs-era Aphex Twin, which probably gives you a good idea that when I say "upbeat," I mean "not ferociously anguished and pained". The little geographic tour of "Pox" (Mendocino, Klamath, Siskiyou, Shasta) leads to the uplifting lament Jesus is wondering if even He can love you, and it's that kind of imagery that permeates La Foret. In other words, a warm summer afternoon this ain't. That's okay because the intense nature of the music makes it too captivating to stop listening even though you feel like you're eavesdropping on an all-too-personal conversation.

"Saturn" is the sonic equivalent how many felt after the 2004 election—except more graphic. "Saturn" is an "ode" to Dubya and Goya's Saturn, where our president ends up on the short end of the cannibal stick. In a little more playful mood, "Bog People" is closest to the Digital Ash in a Digital Urn indietronic atmosphere, except much more claustrophobic and menacing. La Foret closes with might could be the soundtrack to the hell scene from Event Horizon that is really, at its core, about a berry on a thorn bush. It seems that Stewart can find suffering anywhere he looks.

Xiu Xiu has created an album that exists in the sonic divide that is housed between Aphex Twin and Bright Eyes, taking the torment found in the music of the former with the anguish found in the lyrics of the latter. Then, it's all topped off with vocals that quiver between Björk and Will Oldham (and even darker than that duo's recent collaboration "Gratitude"). La Foret is to indie music as a David Cronenberg movie is to indie filmmaking: so disturbing yet ethereal and honest at the same time that even though you might begin to feel sick at the experience, you can't keep away.