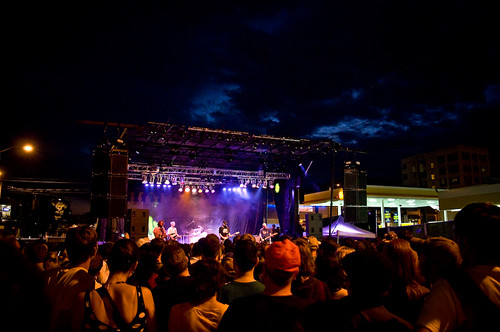 Block party started off mellow enough with the sultry blues of The Dutchess and The Duke kicking off Friday on the main stage at 4 pm with “Reservoir Park,” the gravel between Jesse Lortz and Kimberly Morrison’s deep vocal harmonies foreshadowing the fine layer of grit that would coat my skin by the end of the day.

As far as I could tell The Dutchess and The Duke didn’t have much of a set list planned and they informed the audience that their bassist had only practiced with them three times before. Considering Lortz has a new-born and the band is gearing up for a month long tour with Modest Mouse to release their new album Sunrise/Sunset, their unplanned set seemed effortlessly smooth. I guess this can be expected from these two Seattleites who have known each other since high school and played in a multitude of bands in and around Seattle (watch the imaginary interview).

In the four songs I caught the end of the Flexions eclectic set on the Vera Stage, they ranged from droned-out synthy shoegaze to catchy surf tunes, their songs breaking and popping into variations on intstrumental themes aided by the computer behind guitarist Devin Welch and bassist Robin Stein. Their wide range of sounds allowed one song to cast a heavy darkness over the late afternoon or drop an up-beat ray, reminiscent of Tom Waits’ Real Gone, onto 10th avenue. Despite all their ambience, their stage presence was lacking.

From the little I overheard of Spinerette I didn’t need to get any closer to make out Brody’s distinct singing that failed to make Spinerette its own beast, distinguishable from The Distillers. With little to learn from that set, I headed back to the Vera Stage for Bow + Arrow.

Since Benj Rouse has been a powerhouse drummer behind this band on his own, I was excited to see what Bow + Arrow would do with the inclusion of a second drummer. The division of drum duties didn’t deliver any overwhelming energy to their set. The drums mostly served to bring together the choppy transitions. Lucas Thilman’s apology for being a jam band at the end of their set felt out of place. Despite the improvisational nature of this show, Bow + Arrow’s show was a genuine display of a hardcore band enjoying themselves in light of their immanent disbanding (watch the imaginary interview).

As I was headed to Neumo’s stage to see The Blakes, I got distracted by a cover of “Born to Be Wild” being played by The Black Lips on the main stage and lingered behind the beer barrier long enough to hear “Hippie, Hippie, Hoorah” and realize that the sound of crackling coming from their equipment wasn’t intentional, but sounded great.

I left the sweet yips and hisses of the Southern trio to be smothered by the deafening heat and distorted guitar of The Blakes inside Neumo’s. Their audience couldn’t help but be enthused by the sheer volume of the sound blowing over them–every single one of their instruments could have been turned down. Over all they were a solid bang-out band and the end of their set was comprised of songs that sounded like a mix of The Stooges and The Stones—Their recorded material is not so straightforward. If you care to look closer into this anomaly, look for their new album, Souvenir, out in October. 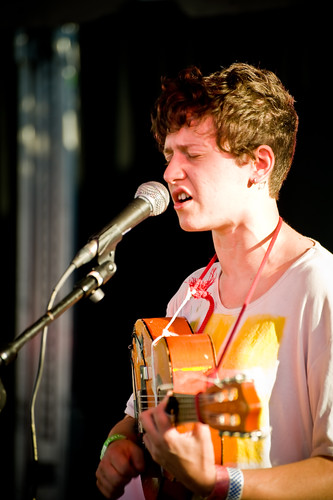 Back at the Vera Stage I was immediately sure that Micachu and The Shapes were the gem of the festival. Little Mica Levi strummed away on her modified guitar, a tiny little thing played with a hammer action called a chu and a bowed instrument fashioned from a CD rack. Next to Raisa Khan’s keyboard there were two empty wine bottles on cymbal stands and two cowbells. Attached to the full drum set, manned by Marc Pell, was more cowbell. Let’s just say, no one could ever fault Micachu and The Shapes for a lack of cowbell.

Throughout their set the keyboards hummed over spoken and spewed vocals, suddenly turning into an electronic thrashing for your eardrums. Harnessing the crackle of technical difficulties that The Black Lips hadn’t intended and placing it with meaning into the jarring keys, their songs slowly settled into brief melodic interludes and frenetically moved into syncopated blues. Overarching melodies were discernable through the veneer of cowbell and cymbal tinkling down over Mica’s horrendously perfect throat moans into the microphone, like raindrops jaggedly making their way down a window pane in a thunder storm.

At the end of Micachu and The Shapes’ most straight forward song, “Golden Phone,” Khan started slamming her palms along the keys and the song dissolved into a brief stint of insanity before it became even more pop-along-to and descended once again into what makes this band great—Not writing straightforward songs, but using punk sensibilities to contort pop into fun and unexpected shapes.

Even while I couldn’t tear myself away from Vera Stage even a little early, I knew, throughout Micachu and The Shapes’ set, Deerhunter was starting any minute. Thankfully, Mica and the band were also extremely interested in Deerhunter and so we all headed over to the main stage, pushing to the front of what had, in the past hour or so, become a packed to capacity and much more intoxicated block party. 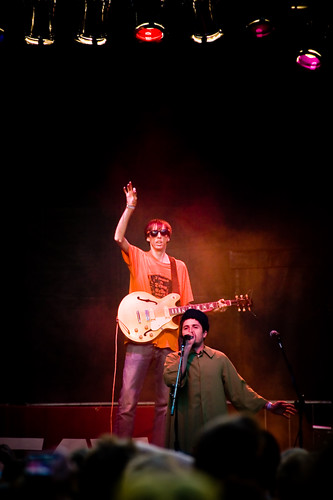 What summed up Deerhunter’s set was the look plastered on the bassist’s face. His expression was as dreamy as even their most aggressive songs can be. They escalated from instrumental ambience to catchy melodies and on into extended bridges rife with riffs and danceable drums without ever falling into a self-indulgent solo.

Lead singer, Bradford Cox laughed off mistakes during “Rainwater Cassette Exchange,” and while playing “Agoraphobia,” the bassist turned his sunglasses upside down. A little guy ran out on stage in a trench coat with a bottle of Makers Mark, yelled incoherently into the mic and ran back off. Was it one of the members of The Black Lips? The bottle stayed on stage and they ended their set with “Operation,” off Weird Era Cont.

Built to Spill played a set packed full of audience picks and it was nice to know that my fellow city dwellers share much the same taste as me in the songs that make Built To Spill’s albums meaningful, including “Carry the Zero,” “You Were Right,” and “Reasons,” to name a very brief few. After reveling in sing-a-longs and a youthful nostalgia, made all the more sensory for the scent rising from the damp cement in the slight drizzle, I sauntered over to the Vera stage once again. 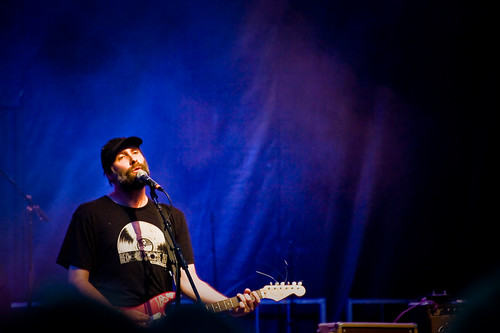 I am pretty sure that my pinky toe is broken from jumping around in the Mika Miko mosh pit wit
h a crowd that seemed more excited by the dance injected punk noise than the band. Singer/saxophonist/keyboardist Jenna Thornhill repeatedly lamented that last year they played the small stage and this year, they were playing the small stage. The size of the stage hardly mattered, as they were the perfect way to regain a bit of the enthusiasm that had waned as day one of Capitol Hill Block Party came to an end. 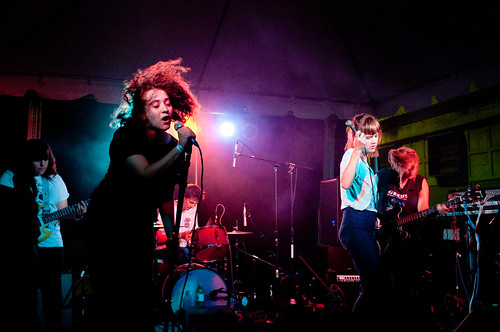 All of the photos without photo credit noted above are from Trickshot Photography… see them all!