As I approached Block Party from Broadway on day two of Block Party, I heard the rising wave of Hey Marseilles on the main stage. Upon entering, my half hung over self was immediately swept up in their orchestral swell. Their performance only got better and better until the last song where their improvised musical meanderings became overwhelming. 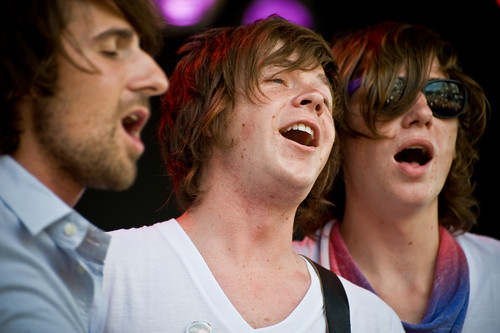 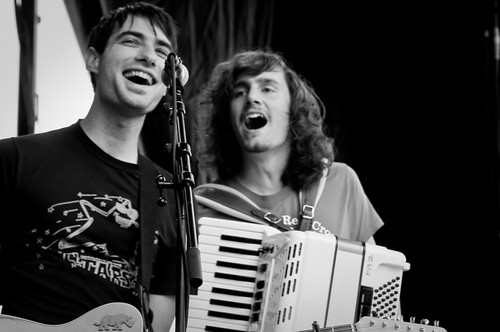 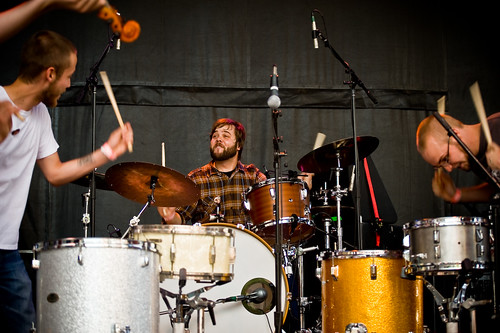 By 3:30 the Saturday heat smothering the Vera Stage was intense and as Collin English, drummer of The Pica Beats expressed in their video interview, losing three pounds playing their set was the highlight of the show. It wasn’t their best set, but the use of a horn section in lieu of recently losing their keyboardist, worked extremely well, especially on the extended version of “Territoire” (watch the imaginary interview).

The shade in Neumo’s during The Girls hardly offered respite from the heat, as the floor was packed for their set that started off with an Elvis Costello feeling of light-heartedness, but became more cut and dry rock as their songs employed Nirvana-esque feedback and shredding solos. Personally I’m of the opinion that the world does not need another guitar solo. So I left to join the smiles beaming up at the main stage as Brooklyn-based, The Pains of Being Pure at Heart began to play a set that was all crashing and soft, like a two ton truck full of angora bunnies had been dumped on the crowd. 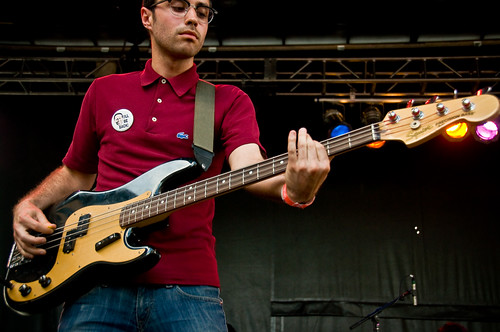 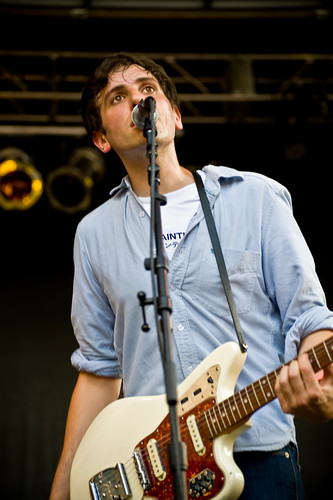 Let’s say a crap-load of extremely furry bunnies had been hoping around during their set, we all could have started knitting scarves and gotten really down with the twee that The Pains of Being Pure at Heart were already draping over our shoulders. I had been looking forward to seeing TPOBPAH perhaps more than any other band at Block Party, considering this was their first show in Seattle. I wasn’t the only one; you’d think they had played many times and were beloved by all, based on the audience reaction. Their boy-girl harmonies were not perfect and that was fine with me, in fact I wish I could have heard the vocals better over the rolling fuzz of sound. I swear strangers were making friends as “Everything With You” began and by the end of their set, I felt kinder towards everyone around me and psyched for the upcoming release of their Higher Than The Stars EP, out September 22nd on Slumberland. 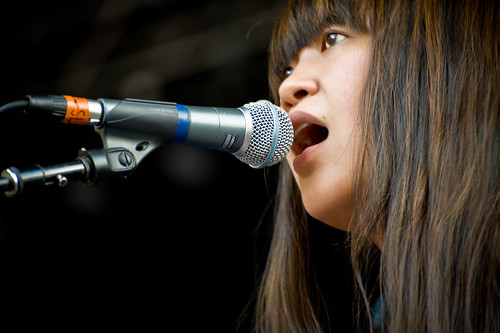 Next I caught New Faces playing the Vera stage and wondered when the post-punk revival of Interpol had been revitalized and if this wasn’t another post-post-poster band. However, the new material they played used a decent amount of keyboard that managed to uplift their sound and add an interesting dimension to the warbling vocals of Nico Janssen. The crowd had a conspicuous amount of parents in it, but everyone was clapping along to almost every song. 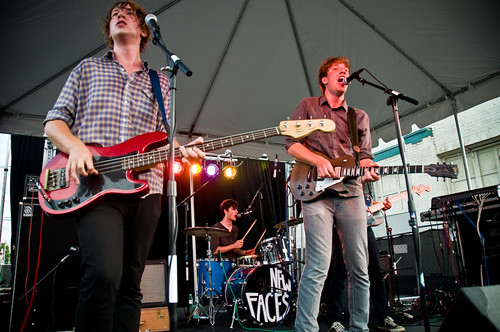 The Thermals took the main stage as the sun was setting but I could see enough to catch the fist-pumping on stage during “How We Know” before breaking into a cover of Nirvana’s “Sappy.” Despite our location making this cover a safe-bet crowd pleaser, somehow this seemed ballsy in The Thermals’ unabashed admittance of their influences. Not content with one cover, they also played The Breeders’ “Saints.” This brought me great joy as I feel like they probably play a tighter live version of this song than The Breeders themselves. 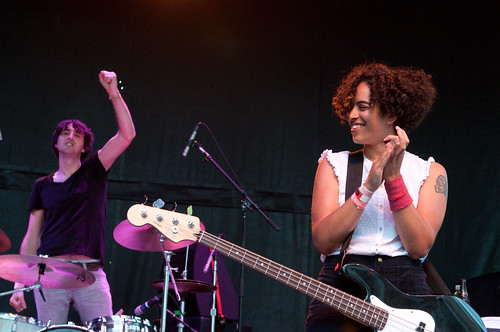 (Thermals photo by joshc as posted in the TIG flickr photo pool.)

Sauntering into The Lonely Forest’s set I was impressed by the way that this band didn’t limit itself to any one musical genre. Their sad slow songs became yelled laments, harnessing a slight amount of grungy introspection. They were consistently melodic, never plain old noisy, and during “Malconstitution” it began to rain with sincerity almost equal to that of the singers vocals. However, despite the yelling, the tight melodies and the sincere-soaked lyrics, The Lonely Forest never became emo, or even screamo. They managed to coat their songs in a softness that didn’t allow the emotions expressed to feel feigned.

While watching The Gossip cover Aaliyah’s “Are You That Somebody,” I was debating taking Thurston Moore’s advice during his live KEXP interview that we all go home and deactivate our Facebook accounts tonight. But how could I focus on that as Beth Ditto said “Cheers bitches,” and we all started to drink. The Gossip rocked out, Ditto’s breathy powerful vocals backed by the forceful and fun tunes being weaved together by Paine and Billie. They seemed to being having a blast, Ditto breaking into a rendition of Tina Turner’s “What’s Love Got To Do With It,” before they trailed into their own hits. 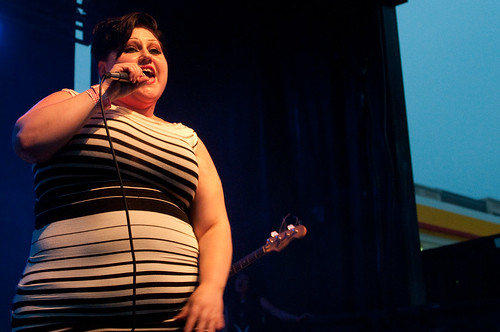 (Thermals photo by joshc as posted in the TIG flickr photo pool.)
Next was the set that I was perhaps most surprised by. Future of Left was inside Neumo’s, and even though it seemed like everyone was outside for the end of The Gossip and the beginning of Sonic Youth on the main stage, it was packed. As aggressive as their albums may be, The Future of The Left’s live show had the floorboards caving under the collective pounding of the band and the audience. Someone had their crutches in the air, clapping along to Andy Flakous’ synthesizer playing. Mclusky fans may feel that FotL’s use of a synthesizer is too divergent from the guitar driven rock they loved, but don’t be fooled, this element is what made these songs more than just testosterone packed pounding.

Thurston Moore told us that Sonic Youth’s set would be mostly tracks off The Eternal, and I knew it would be widely covered, so while I stayed to absorb some of their set, since I adore them, I quickly headed to Vera Stage to end my night with Vancouver band, The Japandroids. I’m pretty sure guitarist Brian King brings his own fan with him on tour so that he can stand in front of it and blow back his glorious curls. If this was just a fluke, he should consider making it a staple of their live show.

For two people they packed a lot of f-ing energy into their songs and were still asking the sound people to make them two times louder. The drum kit was facing the side of the stage rather than the front and while drummer David Prowse sang on “Rockers East Vancouver,” a slightly emo jam, King stood with one foot on Prowse’s bass drum, strumming away. You could tell that these two boys have a lot of love for each other and were having a seriously good time defying the festival, saying, “We’re just gonna keep playing till they pull the plug. Heck, we’re in Seattle, not Vancouver.”

And so day two ended, leaving me with the knowledge of just how loved Seattle is, with almost every band citing Seattle as one of their favorite places to play. Maybe they say that everywhere they go, but I for one felt it.

All of the photos without photo credit noted above are by Trickshot Photography… see them all!