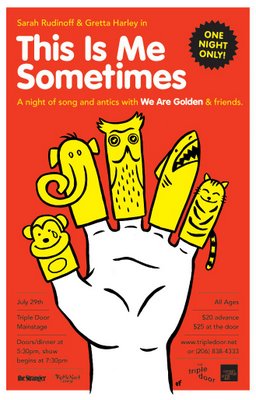 Tonight: We Are Golden at the Triple Door 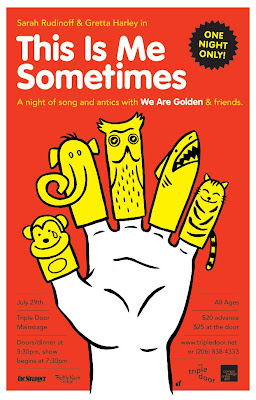 After the past few days, I am willing to recommend any show that promises air-conditioning. Having said that, tonight’s show calendar boasts a show that I am quite enthusiastic about, which happens to also be in a venue that has AC.

We Are Golden is the duo of theater legend Sarah Rudinoff and Gretta Harley, an acclaimed musician who also at Cornish College and their show tonight promises to be a huge extravaganza – in a good way. Their music is includes elements of blues, jazz, cabaret, rock and pop. When I interviewed the ladies from We Are Golden at the beginning of the month they told me some details about this show:

Sarah Rudinoff: For this show we were thinking, after a few people asked if we had an opening act, that for a show at the Triple Door, who could open and thought “we could have them open or we could have that band open” but then we thought “we both do our musical things outside of the band”. I do this cabaret thing with more covers. I really love doing covers but people say to me “you shouldn’t do covers” but to me, that’s like saying “you really should write your own monologue and master it”. Basically, performing someone else’s monologue is doing a cover, if you think about it; it’s your interpretation of someone else’s story.

Gretta is doing a performance with all of these Seattle chamber players. She has an incredible quartet of musicians; they do shows at places like On the Boards and Benaroya Hall. They commissioned Gretta to write a piece for them and they’re going to play that piece.

Gretta Harley: There is only one person from that because the other three are in Wagner-land with the Symphony.

You can read the rest of my interview here.

We Are Golden plays tonight, Wednesday, July 29, at the Triple Door. Tickets are $25.

Here’s a promo video for the band to give you a hint of what you can expect tonight: