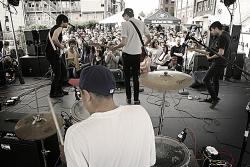 Abe Vigoda is a noise punk band from LA, coming out of the scene from The Smell – an all ages club. Their peers include Mika Miko, No Age, HEALTH, The Mae Shi, and Barr.

Their set at the Capitol Hill Block Party was delayed about 10 minutes because they said they were stopped at the border and the guards "didn't want to let us come home." They said they had to borrow the gear of Talbot Tagora, the previous band on The Vera Stage and ended up playing for about 20 minutes.

It was a very short set, but it was compelling for a couple of reasons: first, it was interesting to watch the large crowd thin out because they didn't know how to take Abe Vigoda. I'm not sure what the expectation was but the crowd seemed to be evenly divided between people who got what they were trying to do and those who didn't. Secondly, there was a great interplay between the two guitarists, who were in tune with the direction each was going.

Abe Vigoda sounds like an 33 RPM Television record played at a 45 RPM rate. I heard elements of Sonic Youth and My Bloody Valentine (especially the two guitar parts that relied heavily on distortion) and harmonies that sounded like Steve Bays of Hot Hot Heat – with more apocalyptic despair.

Abe Vigoda rocked for a short period of time (and will probably have one of the shortest sets of the weekend) but they rocked the people who got it and confused those who didn't. What could be more punk than that?