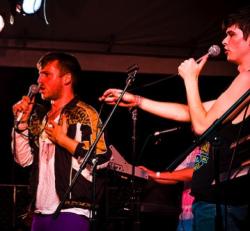 The five-piece dance electro sensation Natalie Portman’s Shaved Head certainly have come a long way since being robbed of the Sound Off! Gold medal in 2007. Not only did they play Bumbershoot last year and Capitol Hill Block Party this year, but they’re also about to go on tour with CSS, following them all the way to Massachusetts. Their debut album Glistening Pleasure just came out this month, and even Natalie Portman herself has heard of them now. So it could have been expected that the crowd surrounding NPSH was just as almost as jam-packed as the Main Stage.

The crowd was much more varied in age than I had expected, from the young teens I had assumed would dominate the audience, to many people well into their fifties. People were climbing the chain link fence that bordered the area just to catch a glimpse of the band over the sea of people.

Natalie Portman’s Shaved Head did not disappoint. As always, they were full of boundless energy, dancing ridiculously on stage in their stylish outfits, and proclaiming to the crowd that this would be “the greatest night ever!”

I’m not sure if it was the greatest night, but it was a pretty damn good one. NPSH played a long set full of gems, including my personal favorite “Beard Lust.” What they lacked in particularly clever stage banter they more than made up for in energetic stage presence, keeping the audience enthralled the entire time.

Unfortunately I wasn’t able to catch the end of the show; I’m sure it was epic. Natalie Portman’s Shaved Head does nothing halfway, and for a fun-loving group of kids, they have accomplished a huge amount already. Someday, that spot on their guest list marked for Natalie Portman at each show will be filled, and the beloved actress will gaze upon her namesake in delight.