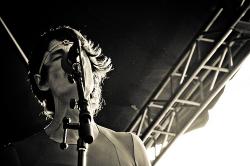 The energy at United States of Electronica (USE) shows is always ridiculously high because the band and audience share the same wild enthusiasm, and continually feed off each others’ zeal throughout the set. It’s never just dancing, or brightly colored spandex, or even packets of Smarties being thrown into the audience like sugary missiles. It’s the music that connects the crowd to the band, prompting them to punch their arms into the air as they shout, “Party people!” with pride.

USE is in the process of recording a new record, they kindly informed us, and they treated us to a couple songs off of it. Though to an untrained ear such as my own, most dance electro sounds very similar, I know that USE’s ability to write short, memorable choruses, coupled with the fact that they’ve been fairly inactive recently, will make their new record very popular.

The only reason I would consider my last USE experience at the VERA Project superior to this one was the fact that the mics did not seem quite balanced. Maybe I was standing too close to the speakers, but it seemed as though the vocoder mic was turned down too far, making the others seem much too loud. A key element of electro music is the distorted vocals, so not being able to hear them was a little disappointing.

However the band maintained their enthusiasm, their energy, and their trademark message of universal love. The set began with distorted vocals (oddly, they were perfectly loud then) announcing, to the theme of 2001: A Space Odyssey, that USE was about to take us on a journey. The journey ended with the same voice shouting a quick, “We love you!” to the crowd. It’s so easy to get bitter towards people at festivals, what with all the rude audience members who push their way in front of you even though they’re a foot taller, but USE was able to remind us all to love our fellows, and ourselves.