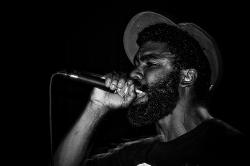 The two Champagne Champagne MCs, Pearl Dragon and Thomas Gray, wore t-shirts emblazoned with pop culture iconic figures of the early 90s: one with Nirvana, the other with Beavis and Butthead. Their nod to that time went much further than their clothing choice and into the type of hip-hop they bring. This wasn’t “gangsta” rap or even the socially conscious flow like Common or Common Market; Champagne Champagne bring clever rhymes and good times a la the bygone rap acts.

To call this another ex-Blood Brothers project would be erroneous, as it has nothing to do with what they did. What this new act does do for drummer Mark Gajadhar is bring him out from behind his kit, boasting his topnotch ear for a legitimate beat. As the DJ for Champagne Champagne under the pseudonym DJ Gajamagic, he isn’t taking the modern route with a laptop — sure, there was one on stage, but from what I could see he also had a pair of turntables and a synthesizer. Just to throw you off, he even busted out a melodica and sang the hooks.

The four walls of King Cobra shook when the bass dropped on their second song. The MCs had everyone singing “black baby Jesus,” while the next song’s chorus stated, “She looks like Molly Ringwald/She looks beautiful to me.” The boys had the crowd hyped up, a crowd much larger than I think has been seen in the new Pike/Pine club.

I enjoy champagne whether it’s a $5 bottle of Andre or top shelf stuff the CEO of my work brings in. Onstage, Champagne Champagne is even better, easily in place to be the next mass hyped Seattle hip-hop group.