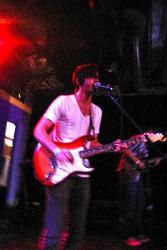 Black Whales are a wide-eyed jangly pop band from Seattle who, despite having to play during the earliest timeslot of the festival, kept up a level high energy at King Cobra and pleased a steadily gathering crowd. The set was only half an hour long and by the time they were finished the club was certainly beginning to swell a bit.

Unfortunately, Kind Cobra was only for those above the age of 21 and many kids were left outside. This was indeed the music of the kids though, with its cutesy hooks, sparse mediterranean rhythms, and just the right amount of sugary melody to keep everyone bouncy and happy this early in the festival. It’s true that candy can give you a great rush –I just hope there’s not a huge crash after this overdose.