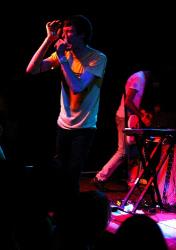 Before any announcements or rumors were made, I could read all over The Blood Brothers’ Capitol Hill Block Party 2007 performance that the end was near; six months later it was official. One thing the decade-long band did right was seamlessly blend the best elements of pop and punk, and not in a cheesy pop-punk sort of way.

Imagine if you took that ability and extracted it, concentrating it down to speaker pumping serum: Past Lives is born. I checked out BB’s new lineup — deeper, and in my opinion better, singer Jordan Billie, bassist Morgan Henderson, and drummer Mark Gajadhar with new guitarist David Welch — when they foirst popped up, opening for HEALTH, one of their first handful of shows. Freshly minted, the performance felt like they hadn’t quite found their footing, yet a promising act was on the horizon.

Past Lives have more than gelled together in the past few months, gaining attention and practice by playing in nearly every small stage of the area. Now at their mass audience debut at CHBP, the musicians looked more confident and comfortable than ever. The punk end bumps your head, the pop end jumps your feet.

By the middle of the set, they had ramped up past all the foot thumping pop and were headed towards a full on blow out. Up in the front, we forgot where we were, our minds set on dancing. The last song was a full force head thrasher. With my hand on the edge of Neumo’s stage, I could feel the speakers pushing the air.