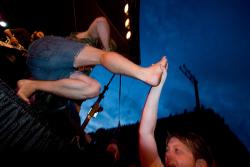 Making his entrance on stage, Tim Harrington was costumed in cut-off jean shorts, a camouflage vest fitted for a girl, a peaked Chinese coolie hat, and what appeared to be the remnants of gorilla fur thrown over his shoulders as a cape. The stage presence for this front man of Les Savy Fav matched his get-up, teetering treacherously between your drunk white-trash uncle at a family reunion and a strip tease–the latter no less heightened by his hand digging deep into his crotch shortly after his appearance.

As the other members of Les Savy Fav played in a manner comparatively subdued and dressed rather conservatively, Harrington carried out his charade. Writhing on his belly across the stage, he wriggled his way out over the crowd who had no trouble in groping his hairy nipples. Unfortunately this was occurring right in my face, and needless to say I moved back to let the throngs overtake him. Dance or die was the way of the land, the frenzy reaching at least back the 20 feet I could see. Spending almost more time cavorting within the audience than on stage, one could never know where Harrington was except by watching the eager photographers scramble and climb over people to follow his every move for that perfect shot.

Their songs pressed on, fighting in a not-quite-neat yet not-quite-sloppy manner with the cacophony of the festival. The opener was hit "The Equestrian" from last years, Let's Stay Friends. They tore through several other tracks off the latest album as well as highly energetic and much loved songs from before their six-year hiatus.

When the opening echoes of the guitar for "The Sweat Descends" came out, I exclaimed, "I've been waiting for this song all day." Apparently so had the girl behind me, who proceeded to thrash wildly before the drums even kicked in. Thwack! I felt her forehead bash into the back of my skull. It was at this point I became all too consciously aware of the mayhem of which I was taking part, and cut out to the sidelines.

Harrington reappeared on-stage having lost everything but his tighty whities. The bassist took a stand, playing atop the stool his singer had found off stage. Still, for all the smiles the other four members had, it was Harrington who commandeered the show. Finding a flannel jacket to tie around his exposed gut, I think he had had enough of the crowd as well, finishing out the set up with the band. After just around an hour, Les Savy Fav abruptly stopped, their singer performing one last act: disappearing in a blink.

Photo by Chona Kasinger
(Chona noted: "This was a very awkward situation for everyone involved.")