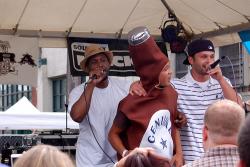 I knew the Vera Stage was going to be the scene of some sweet home-brew hip-hop as I passed the tent where people were paying five dollars to hit ex-Stranger writer Ari Spool in the face with pies as Ol’ Dirty Bastard and Kelis rapped and sang “Baby, I Got Your Money” on the sound system pre-show. The weather was somehow both cool and humid (?) and the vibe reminded me of when I saw The Saturday Knights for one the first times at the Block Party on the same stage two years previous. The rap music that ensued did not disappoint.

Thig Life, “Justo” D’Amato, and Monk Wordsmith have been partners since teenagers, growing up in the South end of Seattle and living on a steady diet of quality hip-hop. Their fandom comes out in their rhymes and music, as they show their influences proudly but also honestly discuss the daily thrills and spills of being marginalized by society even when you’re smarter than most of it.

I was sitting down for the first part of the set in the back on the sound platform, and you know you’re at the Vera when the kids who step in front of you get embarrassed about blocking your possible view of the stage. (Try finding that at any other venue or venue-sponsored event.) It all opened with Scribes, a guest rapper with anger and authority at well, the angry authorities. Various themes touched on the crippling corruption of church and State, and it was pointedly more raw and political than the band he was warming the crowd up for.

I need to check out The Physics’ Future Talk album (produced by D’Amato) as the lively songs seemed to get the crowd dancing more than most of the shows I saw this weekend. The themes may be familiar but that isn’t always a bad thing. Without a gimmick or a guise, The Physics are using their lives as resources and on songs like “I Heart Beer” and “Ready For We” are unafraid to show all sides of themselves. Thanks for bringing the party, guys.