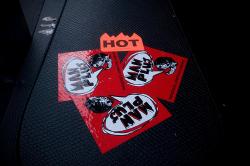 Man Plus is one of the most accessible bands I’ve seen at CHBP this year. They have a dance-y, pop/rock sound that is easy to grasp on to. Live they were a lot of fun.

Maybe it was being outdoors in the heat all day long, but for whatever reason, the crowd never seemed to get into Man Plus. That’s unfortunate because Man Plus was very good. With a sound influenced by bands like LCD Soundsystem, New Order and Talking Heads, Man Plus gave it their best effort to get the crowd – including a singer jumping into the crowd to sing and dance during “Not For All the Cocaine in the World.”

He sings with an Interpolian emotional detachment that made for a nice juxtaposition for the pop/rock music the band was making. The band was a lot tighter and more focused than bands like Little Party and the Bad Business and Natalie Portman’s Shaved Head. They’re ideologically similar, but those two aforementioned bands thrive on punk energy while Man Plus relies on familiarity.

Man Plus is the only band I’m covering at CHBP that I’ve seen live before and if my memory serves, they were a five-piece band with one female member, a singer named Ellen (she was the “plus” in Man Plus) but today they had 6 members on stage and two women. Their setup was two singers, a guitarist, bassist, keyboard player and drummer.

Ellen said at one point that she was distracted by the other singer (whose name I didn’t catch and couldn’t confirm either via their website or MySpace page) and his new gold tooth. Then he showed the crowd his new dental work. They were mostly ambivalent towards the band already and at that point they became confused.

The band closed their set with a slower ballad, and ended anti-climactically but it was one of the most enjoyable sets I’ve caught thus far at CHBP.