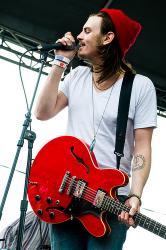 When I originally saw the Capitol Hill Block Party lineup, I knew if there was one band I couldn’t miss, it was Seattle’s own Kay Kay & His Weathered Underground. The band opened the Main Stage on Saturday to a beautiful day with an intent crowd — utterly captivated with this eclectic, larger-than-life band.

Immediately upon taking the stage, the 10-member band (according to Kay Kay superfan ChrisB, that’s “a light showing” for them) got the presumably bleary crowd clapping along with their first song — and this wasn’t a simple clap-clap kinda thing. Without prompting, the audience nearly instantaneously sprang to life and clapped along in exact rhythm with the band, as if well-rehearsed.

From there, the band launched into a set filled with complex-yet-cohesive music that shifted styles in an almost perplexing array of sounds — and I say perplexing in that my notes made no sense in their rapid fire descriptions: “circus maudlin” followed by “70’s glam-ish” and then “Santana-like guitar parts” and then “soaring pop.” It makes no sense at all, yet Kay Kay does and did. While the music wasn’t hook-filled, there were so many delightful disparate parts to relish, such a wave of delicious melody, that I found myself carried away in the bounty of the band. Even the instrumentation was eclectic, featuring an electric cello and French horn in addition to more traditional rock band instruments.

I am loathe as a music writer to say things like “I can’t find the words to describe this band,” and yet, Kay Kay’s performance left me oddly at a loss for how to shorthand describe or compare them. I will say, I now understand why ChrisB has been describing them as the best band in Seattle right now.