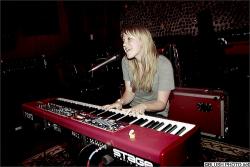 I am head over heels in love with Kaylee Cole.

Her set at the Cha Cha was recommended to me at the last minute, as I was scouring the Block Party schedule for interesting, undiscovered talent. $2 beer specials and beautiful atmosphere helped seal the deal. If you haven't been to the Cha Cha, know that not even the throngs of Block Partiers could ruin its ambiance. Of all the stages this year, this one felt the most intimate — which was perfect for Kaylee's performance.

She sat down at an electric piano and started to play soft, mournful notes. When she sang her first lines her voice broke our hearts but wanted desperately to put them back together. Her vocals are soulful, strong but playfully held back, like Fiona Apple without the traces of angst. Her banter between songs, in contrast, was sweet as ice cream. "Sign up for my mailing list," she told us, "and I'll send you emails. Or recipes."

In some organic fashion, many of us found ourselves sitting in front of her keyboard as she performed, staring up to her and swaying like it was musical story time. She goofed once, hitting the wrong note while scatting during a later number, then wondered out loud, "Who messes up 'Ba-Bas?'" The gaff and her sweet, self-depreciating manner afterward just made us love her more.