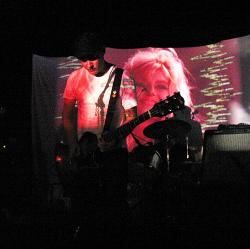 Voyager One taking the stage at the King Cobra was a calm before the storm. From the moment they turned their amps up and strummed their first chords, the crowd was awash in a torrential downpour of their layers of psychedelic fuzz and spacey synths.

The Cobra's lighting makes it seem darker than it really is. I'd love to go back during normal business hours and investigate, but I got a white-on-white impression from the bar, and the downstairs area felt reminiscent of A Clockwork Orange. Even if all that was in my head, the layout of the place was fantastic for a show like this. It didn't look like there was a bad spot in the place to see the stage.

Frontman Peter Marchese asked us if we were enjoying the Block Party, and if we had a good enough buzz. Even if we hadn't been drinking — and yeah, I had — V1's beats coupled with the visuals projected behind them was enough sensory overload to get the crowd feeling tipsy. The band's visual component, provided by Projectorhead, added just the right amount of depth to songs like the aptly-named "Bed Of Sound" and "The Future Is Obsolete," which was the point where the band completely dominated our attention. Voyager One absolutely killed Saturday night.

Before their final song, "Ocean Grey," someone behind me yelled out to the band. "Loud!" he cried.

"Loud it is." Marchese replied.

"Thank you!" the man called back. How polite.