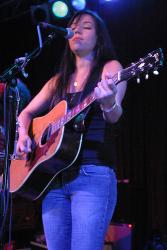 Broadcasting live from KEXP at Neumo's stage, Kristen Ward opened the second day of the Stranger's Capitol Hill Block Party with country-based folk-rock songs of class and passion. A striking brunette with a voice that is much more mature than her years, Ward sounded like the perfect kind of adult rock suited towards a packed night at the Tractor Tavern.

But just as well, in the performance of songs like "Shoot Me Down" and "Drive Away" (also the title of her latest album) there's a strange feeling that she and her band — featuring pedal steel expert and studio sound master Kevin Suggs, and the classy vintage guitar showmanship of Gary Westlake, also doing backing vocals — could soon be headlining at the Paramount. Ward has two albums out already, but her performance today shows she's ready for the next level.

If I were to describe her sound, I'd point first to how people enthusiastically describe Transmissionary Six. But TM6 are more tied to experimental styles and noir chanteuse seduction, whereas Ward's work is more mainstream, polished and less subversive. The third song in the set was a shimmering hymn of transcendence and three songs later she and her band were rocking out almost ska-billy on an anthem, showing an encouraging diversity to her sound. Beginning my second day of the Block Party on a happily diverse but oddly sophisticated note.