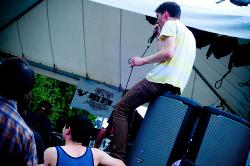 Little Party and the Bad Business

Watching Little Party and the Bad Business play at the Vera Stage on Saturday afternoon made me wish I was still a teenager, before I started thinking Woody Allen movies were funnier than Porky’s.

Playing for about 20 minutes to a small-ish early crowd, they delivered spastic, ridiculous fun. Band members were jumping in and out of the crowd and on top of the speakers and running across the stage. It was goofy and delightful and like their peers Natalie Portman’s Shaved Head, they don’t take themselves too seriously.

Their sound is best described as messy dance punk. They had two keyboards (that share the same stand) and two singers facing one another, encircled by a guitarist, bassist, and drummer.

LP&BB put quite a bit of energy into their set: one band member broke a guitar string and another broke open his knuckles but it was only the need to use the restroom that brought the set to a close. Imaginary Dana and I remarked to each other that we never thought we’d be laughing at so many poop jokes, but there we were. One singer said he really needed to use the bathroom but they agreed to play two more songs at that point. “We’ve got two songs left but I’ll probably poop in the middle of the first one” he said. "Is there a Port-o-Potty under this stage?" His bandmate replied sagely, "The world is your Port-o-Potty."

It was silly, juvenile, shameless fun. What a great way to start off Saturday afternoon.