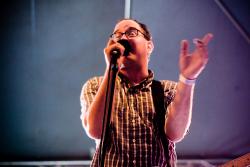 Two minutes into their set, I was convinced The Hold Steady were headlining Saturday night at the Block Party. The way they took the stage as the crowd went crazy made me momentarily forget there was still one more band to see. Craig Finn and the boys launched into their first song and owned the stage all through their set. I'm not sure who was happier to be there, the packed crowd or the pumped-up band.

Finn has talked about his influences in the past, with Bruce Springstein always coming up in the conversation. Yes, there's definitely a comparison to make between the E-Street Band at its height and the raucous bar-band beat that keeps Finn jumping around the stage, yelling out to the audience, throwing his arms out to the front row like he wanted to embrace them, and grinning ear to ear the whole damn time. But you know who else I was reminded of? A happy, positive Elvis Costello, comfortable with his spazz status.

I'm not normally a clapper, and any band asking me to clap double-time during a set is truly asking a lot of me. But when everyone on stage raised their skinny arms to Heaven and clapped out eighth notes, I felt my arms raising of their own accord. Enthusiasm like that cannot be contained, and The Hold Steady's pop hooks bring nothing if not rabid enthusiasm out of a crowd.