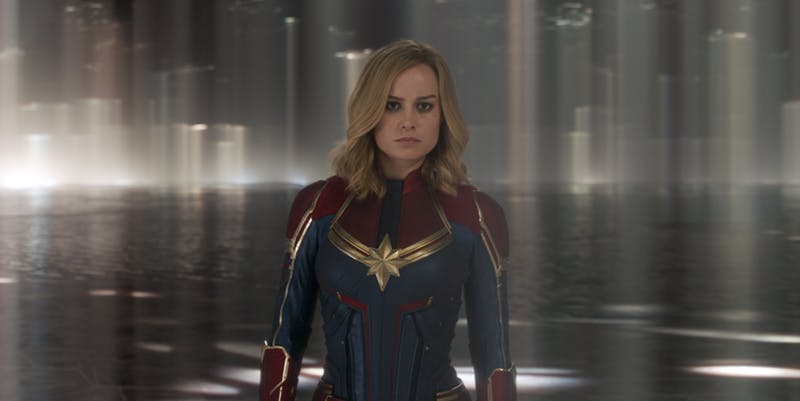 Another year, another entry in the MCU  — only with one HUGE difference: this time, we’ve got a woman in the lead. And it’s a pretty big fucking deal.

Set in 1995, Captain Marvel gives us the origin story of Carol Danvers (Brie Larson), who starts out as “Vers,” a member of an elite band of intergalactic warrior heroes called the Kree. The Kree bill themselves as protectors of the universe, but their main gig is to stop another alien race, the shapeshifting Skrulls, from taking over the world.

It’s established at the beginning that Vers has amazing power, if only she’d learn to “control” it. During her first Kree mission, shit goes sideways and Vers ends up as a Skrull captive, which digs up some long-buried memories. After escaping and crash-landing on Earth, Vers discovers — along with a young Nick Fury (Samuel L. Jackson) — that she’s actually Carol Danvers: a U.S. air force pilot presumed dead for the past 6 years.

The more Carol and Fury discover; the more complicated the story gets. And all along the way, men are trying to block her progress. Men in flashbacks telling her she’s not strong enough, and not good enough; men telling her to give up; men on the street telling her to “smile, sweetheart,” men (okay, alright, MOSTLY just Jude Law as Yon-Rogg) telling her to calm down, control herself, and threatening to take away her powers if she doesn’t.

IT IS EXHAUSTING and I don’t know how Carol survived any of it. Except, oh wait. I do. Because I’m a woman.

Which brings me back to why I LOVED this movie, and why I think Carol Danvers is so amazing. Actually, ALL the women on screen are amazing, even the evil ones. You’ve got Carol and her BFF Maria (Lashanna Lynch) who are both smart, strong Air Force pilots with an unshakable friendship between them (shout-out to Maria for reminding us that in 1990, the Air Force wouldn’t let women be pilots, so they had to take on a top secret project to get around that stupidity); Maria’s daughter, Monica (Akira Akbar), who is clearly growing up in a world where she’s free to explore any possibility; and briefly, Dr. Wendy Lawson (Annette Bening), a kick-ass scientist who develops a light speed engine — and also ends up being a LOT more.

There are so many great scenes here, but also an incredibly amazing moment when you see Carol Danvers throw off the last of her doubts and realize the full extent of her power and IT IS ONE OF THE BEST THINGS I’VE EVER SEEN ON SCREEN.

There is of course, a fair amount of humor in this story too — some of it is comedy gold, particularly for people who remember how. slow. computers. actually. used. to. be. Along with some ridiculously cheesy bits (how Fury loses his eye is particularly ridiculous, but it still somehow worked). Goose the cat is the real MVP of the film, and I enjoyed seeing not only young Fury, but also “new guy,” Agent Coulson. And THAT SOUNDTRACK! I mean, who doesn’t want to watch Carol Danvers kick ass while No Doubt’s “Just a Girl” is blaring?

The whole film was glorious and I can’t wait to watch it again. When I was a kid I never imagined that I’d be witness to not one, but TWO powerful women leading superhero films. We need more. We need so much more, but this is a good fucking start.