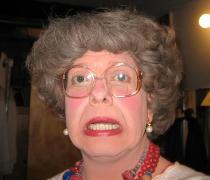 Seattle's most beloved Value Village pricin'-and-sortin' employee, Carlotta Sue Philpott, will be doing two anniversary shows this week — tonight and tomorrow at 8p — and they may be the very last Wing Dings ever.

From the funniest, most distressing press release I've read all year:

Carlotta's Late Night Wing Ding is TEN YEARS OLD! To celebrate, the Wing Ding Gang is putting together a very special anniversary show, which includes some special appearances from old cast members, as well as revisiting some comedic gems from past shows. This will be a PRIME TIME "spayshul" Thursday and Friday, June 7 and 8, at 8pm.

Carlotta's Late Night Wing Ding has been entertaining audiences since 1997 with its unique blend of theatre, variety, improvisation & inspired lunacy. The show has evolved over the years but has retained its "wacky home-spun charm."

"It sure don't seem like ten years," Carlotta told reporters in a recent exclusive with HOWDY! Magazine. "We've had our ups and downs, I can tell ya'll; hot headed directors, mattress queens, midgets, nekkid dancin', waiters from IHOP – they've all been part of the Wing Ding arts and culture."

Rumor has it that this may be the very last Wing Ding, at least in this incarnation. "Well, don't know nothin' about them pretty carnations, but I do know a lot of us are movin' and shakin around the place, so best to come catch this one, or you might regret it!" warns Slaw Philpott, Carlotta's son.

Troy Mink, Carlotta's… emm… nephew: "This may indeed be the last Wing Ding, at least with the regular cast. People are moving and such, so it would be a big shame to miss this show… oh, and there are drink specials!"

Drink specials?! What good are drink specials if we're looking at a world without Carlotta's macaroni-and-bologna recipes, or surly Irishwoman Nellie Murphy getting drunker before our very eyes, or banjo-pickin' Slaw (named after his daddy's favorite salad — it was between that and Waldorf), or manic repressed-homo Terry Gladwell's stories of his "circus big" wife?

I'm a wreck over this. Someone comfort me!