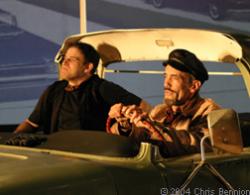 Travels with Charley and The Play's the Thing

The year was 1960. Twenty-one years had passed since the publication of his masterpiece The Grapes of Wrath, eight years since the publication of his other masterpiece East of Eden… and the American writer John Steinbeck was finding himself in a bit of a creative and personal slump. He was in his late fifties, his health had deteriorated (heart attack), and his last two books (The Short Reign of Pippin IV and Once There Was a War) had been poorly received. Feeling out-of-touch with the people of his land and of his work, he decided to take a journey of discovery across America with his (also middle-aged) poodle Charley.

Published in 1962, Travels with Charley: In Search of America chronicles Steinbeck's coast-to-coast-to-coast expedition in the fall of 1960. It was one of the largest commercial successes of Steinbeck's career, and he won the Nobel Prize for Literature the year of its publication. It also turned out to be the author's last work: he died in 1968.

Book-It’s new adaptation effectively captures Steinbeck’s humanist spirit in surprising and wonderful ways. From the high rises of Chicago to the haunted Badlands of North Dakota to the respectively sentimental and savage streets of Monterey and New Orleans, the play and its inspiration chronicle the good, the bad, and the unexpected aspects of our country. It’s a fascinating reflection of what was going on with America during the Cold War and the Civil Rights movement, due wholly to Steinbeck’s keen observations of many prevalent topics — our government, our racial tensions, our environment, our conflicts, our fears — that still remain with us today.

Armed with little more on stage than a full-sized green Ford pickup (it rolls about, quite surprisingly) and a projection screen (displaying cool vintage images to give a sense of movement and change), director Jane Jones and her cast are simply brilliant. John Hutton impressively conveys the comfortable rugged-individualist that was Steinbeck; when he utters gorgeous lines like “A journey is like a marriage: a certain way to be wrong is to be sure you control it”, he is eminently believable. And — are you ready for this? — David Goldstein is funny and charming as the rambunctious Charley. Yes, the dog is played by a human; as much crawling around as he does, one hopes he’s been provided adequate knee padding.

Then there’s the shimmering supporting cast of six, each of whom weaves seamlessly in and out of a huge variety of characters and scenarios. Versatile Theresa Holmes and Dan Dennis provide live bluegrass-tinged music (guitar, banjo, accordion, vocals) and play several roles each. Katie Foster and Earl Alexander are by turns hilarious and powerful; and local treasure Brian Thompson is simply amazing as a series of chatty old men Steinbeck encounters (most notably, a backwater stage actor obsessed with Sir John Gielgud).

Last, and definitely not least, is the ridiculously talented actor David Quicksall, who adapted the book and flawlessly brings to life several of the more notable side-characters (a Vermont preacher, a cheating Chicago businessman, a middle-aged Idaho mechanic with a gay twentysomething son). He’s a joy to watch, and his performances are well worth the price of admission.

Steinbeck observed that "Nearly every American hungers to move", and this enchanting production demonstrates one amazing man’s revelatory journey in his search for a nation. It’s graceful, sad, hilarious, thoughtful, heartwarming. And in the spirit of Steinbeck's advocacy of our nation's less fortunate, Book-It is sponsoring a summer food drive to benefit fantastic Northwest Harvest, and encouraging patrons to bring non-perishable food-bank items to the show. Trust me: you can’t go wrong here.

The Play’s the Thing
Intiman Theatre

Actor John Michael Higgins (you may remember him from the Christopher Guest mockumentaries Best in Show and A Mighty Wind) directs this production of the 1926 Ferenc Molnar-written and P.G. Wodehouse-adapted comedy about glamour, wit, and the power of the theatre.

Set in a castle on the Italian Riviera, it all unfolds as an increasingly funny play-within-a-play concocted by a famous dramatist (David Cromwell) in an effort to ease the potential aftermath of a love triangle between a prima donna actress (Heather Guiles), her idealist composer boyfriend (Quinlan Corbett), and a leading-man lothario (Mark Capri). Cromwell’s character has to do this, of course, without the knowledge of the composer, the lothario, or even his own writing partner (ubiquitous Lawrence Ballard). Throw in a funny old butler (Clayton Corzatte, who played the same role in the 1986 Intiman production) and a bitter busybody male secretary (Larry Paulsen) and you can maybe imagine the humorous complications that ensue.

The performances are mostly superb: Cromwell holds things together beautifully, and I won’t quibble about his Hispanic (I think) accent fading in and out at times; Ballard does what he always does, but not unenjoyably; Capri plays a character whose sheer pompousness is a joy to behold, and his forced renderings of French names in the last act is superb; and Guiles is always good, with the ever-so-slight sense of frailty she adds to her characters.

Corbett, I’m afraid, is the exception. He is rather weak, but so is his youthful (naïve) character. His stilted performance, though, doesn’t distract too much from the play’s comedic charms or exquisite atmosphere. (Speaking of, scenic designer John Arnone and costumer Catherine Hunt deserve shout-outs for their incredible work in recreating the excesses of the carefree pre-Depression 1920s.)

The Play’s the Thing’s comedy is broad enough for the general public, and shrewd enough for the more discriminating. Because the play is indeed the thing, and the good folks at the Intiman have a winner on their hands.