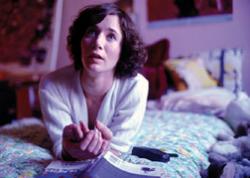 Me and You and Everyone We Know

Coming strong off of awards at Sundance and Cannes, Miranda July's debut doesn't dissapoint, but it was hard to reign in my enthusiasm when the lights dimmed for fear of unrealistic expectations. For a longtime fan of her work (especially the great learningtoloveyoumore.com), the stakes were high for her first narrative feature-length film.

Parsing the plot of Me and You and Everyone We Know is a little difficult, if not superfluous — screentime is devoted to a large cast of loosely-connected people all looking for connection. At center is Richard (John Hawkes), a recently separated shoe salesman with two kids, and Christine (July), an eldercab driver and aspiring video artist. All around them people try to find a match, assuming that physical collision is the best route to someone else's interior. These encounters, all with varying degrees of frank and comic sexuality, range from tender to awkward to moving, sometimes in the same moment. Everyone gives heartfelt performances, imbuing the scenes with an odd, paradoxical warmth and absurdity. In the role of Richard's youngest son, Brandon Ratcliff is a wonder, as he deftly handles some of the film's funniest/dirtiest lines.

July's work has been praised as retaining the wide-eyed bluntness and creativity of childhood, which Me and You carries in spades. This sometimes works to the film's disadvantage, however, particularly in the near-constant sentimentality and in Richard's prosaic dialogue. There is no real danger or consequence in the film; everyone gets what they want, nobody is hurt for long. Here is where July's background cuts both ways: she brings a genuinely new, talented voice to cinema but hasn't digested its elements enough. The result is an amalgam of performance art and film, oftentimes beautiful, other times incomplete.