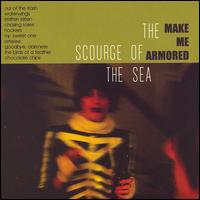 "Chasing Roses" by The Scourge of the Sea

Lexington, Kentucky trio The Scourge of the Sea put out the best album you didn't hear last year, the exquisite Make Me Armored. I happen to know a lot about them since I just interviewed drummer Robby Cosenza last week (I think my smart little iPod can smell them on me), but I'll spare you the back story and just reiterate that you absolutely should hear this band.

"Chasing Roses" is one of the album's more lovelorn songs. It also features the lyric that the album's name came from: "I'm racing horses in an old pipe dream / Make me armored for the places I've been…" In fact the lyrics are full of clever poetry, like all the songs on the album. Andrew English's vocals are flawless; he sings with a restrained, subtle power, never pushing too hard and remaining very intimate. The song's alt-country guitars give it that Jayhawks-like romanticism, but the graceful slide guitars make way later in the song for heavier strums, adding a little grit to make it more than just another pretty song. The band manages to create multi-dimensional songs that have a simple and approachable surface.

On first listen, one may say, what a nice album. Listen repeatedly and it evolves into "HOLY CRAP, THAT WAS AMAZING." It did for me, anyway. Now that I've had my copy of Make Me Armored for 9 or 10 months, it's officially among the most beloved in my collection. I've been lucky to see them live twice (Lexington's a loooong way from Boston but they are touring machines), and I can't gush enough about how awesome they are so just take my word for it and go see them ok? They're recording their next record this summer and maybe if you're lucky they'll hit the Pacific NW soon thereafter.