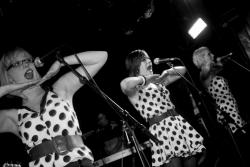 The Pipettes at Chop Suey

If there ever was a band that was designed specifically for me to enjoy, it would unquestionably be the Pipettes. I love the multi-layered harmonies and lush production that a lot of “girl groups” like the Ronnettes, the Angels, and the Shangri-Las used as many as four decades ago. The Pipettes update that sound for this decade, but just barely.

The band still relies on simple, upbeat pop songs but also employs a more traditional “indie” backing band. They are called the Cassettes, who, like the Pipettes, wear matching outfits. The ladies are always (or at least were each time I’ve seen the band) in polka dots and the guys are always seen wearing yellow sweater-vests.

The first thing anyone notices when watching the Pipettes is that the three members — Rosay, Gwenno, and Riot Becki — are stunning. That grasps your attention but their voices captivate and hold you through a likeable stage presence and some of the most ridiculously catchy pop songs in recent years. Most bands show up to entertain the audience; with the Pipettes, it's more of a seduction — albeit a playful and quasi-innocent one.

The Pipettes live show is carefully choreographed, and the dance moves didn’t seem to vary much from when I saw the band last at SXSW three months ago. The set list from this show also looks identical to one from a show in New York the week before. Neither of those mattered to the appreciative crowd, who collectively danced and sang along to most of the tunes, even if their full-length We Are the Pipettes {review} has yet to be given a proper US release.

This show marked the fourth time I had seen the Pipettes live, but the first time I’ve been fortunate enough to see a full set, as each prior time the set length clocked out after a half an hour or less. Overall, this was easily my favorite, mostly because the band played each song (or nearly each song) off We Are The Pipettes (which should find its way into domestic record stores sometime in August), although it was ostensibly in town to promote the recently-released four-song EP Your Kisses Are Wasted on Me.

By the time the show ended, it was close to midnight. The band was on stage for close to an hour and had charmed nearly everyone in the club. Because most Pipettes songs hover around the two-minute mark, the band was able to play all of their well-known songs, as well as a few new ones. In fact, the final five or six songs played were the most memorable from LP.

When the ladies were ready to finish up their set (before the encore) they invited opening band Smoosh (who were terrific – and even added 10-year old sister Maya on bass) to dance around on stage to “Pull Shapes." The encore was comprised of “ABC” – my favorite Pipettes song, where the band bemoans having a boyfriend who is very smart but has never heard of the band XTC, as well as the band’s theme song, with a chorus, “We are the Pipettes… if you haven’t noticed yet, we’re the prettiest girls you’ve ever met…we will drop you in our nets.”

I couldn’t fathom anyone in the crowd disagreeing.