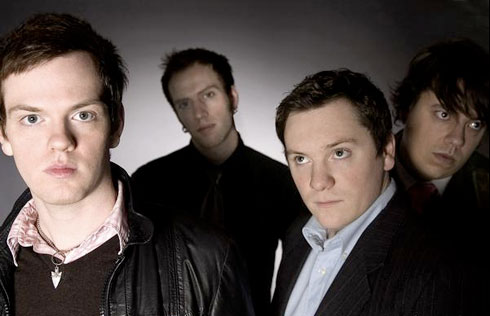 Coffee with a Rockstar: The Divorce

{The Divorce. Photo by Breanne Koselke.}

Some of Three Imaginary Girls’ favorite (and some infamous) moments of the first five years of our tiny lil web existence (from 2002-2007) involve The Divorce.

Over the course of an introductory EP, two full-length albums (2003’s There Will Be Blood Tonight and 2005’s The Gifted Program), and countless live shows, the Divorce embodied the both the sweet and salty of the Seattle music scene of the time. On stage they were fresh and fearless, belting out beautifully destructive pop songs to packed crowds.  Then, in 2007, they decided to call it quits (the ‘D’ word if you will) and dispurse into different bands and projects.

On Saturday, July 30, 2011, they will once again take the Crocodile stage together to Divorce it up and of course we’ll be there. What a better time to chat with the four Divorce fellas (Shane Berry-lead vocals, keyboard, guitar and tambourine, Garrett Lunceford-lead guitar, Jimmy Curran-bass, and Kyle Risan-drums) to find out why they are reuniting now and offer some more insight into the band for those that might have missed them the first time around. To do so, I thought it a great opportunity to resurect our original interview series (circa 2002-2006): Coffee with a Rockstar.

TIG / Liz: I can’t believe in all of our Divorce fandom TIG never sat down for a Coffee with a Rockstar imaginary interview with you guys. It’s surely a sign of our shyness. This chat is a long time coming and there’s a lot to catch up on, but first, we have our ice breaker traditional first question:

What’s your favorite coffee drink?
Kyle: Iced non-fat mocha, light chocolate.
Garrett: I’ve been good friends with Americanos for quite some time – at Arabica they put them in a pint glass for me!
Shane: Irish.
Jimmy: Iced Americano.

I’m sure you’ve been asked this a bunch already, but there’s some speculation ’round these parts… Is this reunion show a sign of more Divorce things to come?
Kyle: Depending on how this show goes, maybe?
Garrett: One thing at a time ladies 😉
Shane: Well, I live in San Francisco, so there has to be some planning to put stuff together. But would never say never. Ever.
Jimmy: Well, mostly we were just excited to play together again after such a long time. Practicing for this show has been super fun though, so I guess never say never.

Does this mean that there will be any new music from the Divorce?
Jimmy: Before we broke up, we actually recorded a third album titled In Arms. We never got around to mastering it, but when we decided to play a show, we called Martin Feveryear and had him work his magic on the project. It is now all done and shiny, and you can actually download all three albums for free online right now at thedivorcereturn.com.

How did you all decide to mark the 4 year anniversary of your break up with a show?
Kyle: Seems like it was kind of a coincidence we ended up with the exact anniversary date.. We just felt like rocking out?
Garrett: If I remember correctly, when there was talk about a Vendetta Red reunion. I had spoken with most of the original members and they were into the idea of The Divorce and Vendetta Red playing a show together. I remember talking to Shane on New Years (real late/early) about the possibility of playing the show with them. Then as the VR show turned out to be less of a reunion and more of a performance of the last record with one of the original members – we decided we should still play a show because it sounded fun.
Shane: I was drunk.
Jimmy: I am not sure actually. We had talked in the past about doing another show, but things got away from all of us. Personally, I just wanted to hang out with the other guys, this was the easiest way to do it.

Are there any surprises planned for the show? Any commemorative merch?
Garrett: I might wear a cape 😉
Shane: We will sign body parts for cash. Within reason.
Jimmy: No merch, just the free albums, although I think I still have a Divorce shirt in my drawer. Its pretty beat up though, so I am willing to sell it to whomever is interested for a discounted $40.

We are so excited to hear all of our favorite Divorce songs (you *will* be playing “Redcoats”, right?!)… are there any in particular you’re excited to revisit? Have they evolved at all during your time apart?
Kyle: I’m excited to play the stuff from In Arms, I think its our best stuff we ever wrote and wish more people had gotten to hear it.
Garrett: I don’t know if there has been any evolution of the songs themselves, but it is absolutely wild to sit down with the guys and play songs I haven’t even thought about playing in 4 years. My hands are super wonky.
Shane: We will play “Redcoats.” It is really weird listening to these songs, much less play them.
Jimmy: “Redcoats” will be played for sure! As far as excitement, I think we are excited to play all of them! I know I personally forgot how much fun all of the Divorce songs were to play. They have evolved a little, but that is mostly due to me trying to teach myself some of them again. We’ll call it artistic liberties.

Is this the first time you’ve revisited your songs since your last show in 2007?
Kyle: Yes it is.
Garrett: See above answer 🙂
Shane: Yes. It’s a trip. Feels like they were written by completely different people.
Jimmy: Absolutely. I have played a few of the bass lines by myself over the years, to warm up for practice with other bands, but we haven’t sat down as a group and played since we broke up, until we recently started practicing again.

Have your feelings about your songs changed over time? Do you see other dimensions to the songs or anything you’d like to update in them?
Kyle: Some of the older songs sound a little dated to me, but then some that I didn’t like as much back in the day are super fun to play now. Some times on an old song I will play the drum part and think “whoa, that’s weird, why the hell did I write it that way?” And some just feel totally natural, like I would do the exact same thing if I were writing the drum part now.
Garrett: There are definitely some songs we’ll listen to and look at each other and we’re all making  “What was that all about?” faces.
Jimmy: Every time I listen to the albums again, I find things that I never heard in the songs before, because I was always so intent on listening to my own parts. Kyle, Shane, and Garrett all did amazing work on them, and now I listen to them instead of me. So I think that they got better.

If you were interviewing yourselves in the early years of the band, what would you have predicted for yourselves as a band?  And what would you have predicted you’d be doing in 2011?
Kyle: Oh, man I don’t think I could even imagine being 32 when we started the band…
Garrett: Preparing for 2012, obviously. I try not to make predictions without any observation to support my hypothesis.

What is your favorite Divorce memory?
Garrett: I think touring with the guys was always a lot of fun. Even when we did a “tour” with Fu Man Chu, we managed to have a blast.   There was one particular happening in Eugene Oregon, it involves Kyle and the woods (aka someone’s back yard) and me waking up in The Lashes van outside of a motel.
Jimmy: I can say with a lot of confidence that all of my Divorce memories are amazing. I think some of my favorite times were playing Seattle after being on a long tour where we didn’t know anybody, and seeing all of our friends and fans. Those shows were the most fun.

What is your favorite Divorce achievement?
Garrett: I think the fact that we were able to record, play shows and tour is something I’m proud of. Any band that can do that should be stoked about, regardless.
Jimmy: Opening for Joan Jett was a big one.

You guys are so talented, it’s hard to keep track of all the things you have going on. What are you up to now musically and otherwise (if I may be so bold)?
Jimmy: How very forward of you! I will let the other guys answer for themselves, but I am currently playing in a band called Mal de Mer, which is Michael Lee from Lila, Eric Wennberg from Slender Means, and Lesli Wood from The Redwood Plan and multiple other things. As far as non-musically, I have done a whole lot since The Divorce. I finished culinary school and am now a partial owner of a coffee shop on Queen Anne called Bustle.
Kyle: I am working as a graphic designer. I designed the cover for In Arms and the new show poster. Its fun!
Garrett: I’ve been teaching private lessons at a k-12 school here in Seattle for a while now, I’m also attending WWU, working on an Ed degree, teaching certification as well as an endorsement in special education. Music wise, I put on a weekly soul dance night at Havana with Michael Vermillion (OG bass player from VR) called Sophisticated Mama as well as spin at Talcum at Chop Suey.  I also play drums in a fun band called Ships.

What made you decide to call it quits before?
Garrett: SHANE BERRY!!! (hahaha)  I think it just got to a point where we were getting tired of being “The Divorce” We all had other things we wanted to do (school, marriage etc).  I started playing with Kay Kay as soon as we broke up.  I just remember Shane calling me and saying something like “I think its time to put this horse to rest.” He definitely mentioned a horse.
Shane: I was actually talking about a real horse I had seen on TV that looked sleepy, but I can see how Garrett might have gotten confused…
Jimmy: I think we were just done with music for a while. All of us are on great terms, so it wasn’t that. I think we all wanted to explore other options.

What are your feelings about playing the new Croc as the Divorce?
Kyle: I played there with Shane in our post Divorce band Silverteeth, it was fun and the sound and stage are nice. Sight lines are better. Not really the same though. I miss the rug horse.
Garrett: That stage is really high, and I haven’t played guitar in a band in 4 years…..scary.
Jimmy: Excited! We used to play the Croc so much it was like a second home for us, so going back to play as The Divorce will feel like a family reunion, but part of the family got remodeled.

How did you choose the lucky bands that get to open up for you on 7/30?
Kyle: Birds and Batteries are friends with Shane from San Fran, Our friend Eli who books the Croc recommended the other band.
Garrett: We threw a dart at a bunch of bands we stuck to the wall 😉

Are there any Seattle bands that you hope get inspired by your reunion show and get together for at least one more show?
Kyle: Hmm. Good question. Maybe Juno?
Garrett: Nirvana. No no wait….. Jimi Hendrix.
Jimmy: I would love to see Juno one more time, or Kane Hodder!